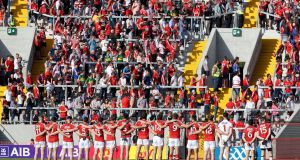 Cork county chair Tracey Kennedy says that the status of football in the county has long been an issue and so to an extent the launch of #2024 – A Five-Year Plan for Cork Football seeks to bring the county somewhere it has rarely been.

“It does but in the plan I borrowed the quote from Einstein that we can’t solve problems by using the same kind of thinking we used when we created them. This is about a culture shift.

“I remember when I was PRO and talking to Jimmy Barry-Murphy, who was hurling manager at the time and a former dual player, about the difficulty of getting support for football and he said to me, ‘it was no different when I was playing and we won the All-Ireland in 1973 but there was much greater support for hurling’.”

Football in the county is nearing rock-bottom with no Munster title in seven years and no under-age All-Irelands in a decade. The decline since winning the 2010 senior All-Ireland has been precipitous.

The new plan, which goes before the clubs for approval at county committee at the end of the month, focuses on four areas: clubs and schools, the public, county teams and administration.

Its intended outcomes include: Cork being regular All-Ireland contenders in all grades of inter-county football, including club championships, within three to five years; support for Cork football and the profile of the intercounty footballers to grow significantly within one to two years and a clear player development pathway to be created by the end of 2019, producing a regular supply of quality footballers within the next five years.

To that end a number of key appointments will be made, most critically a project co-ordinator to draw it all together and a High Performance Manager, who will serve both hurling and football.

For Tracey Kennedy, however, the over-riding consideration will be to enhance the status of the game and its players in a county, which has been hard-wired for hurling during its entire history.

“Those appointments are vital to the delivery of the plan but the real factor critical to its success is the engagement of all the stake holders because if we can’t get everybody to buy into this plan – clubs, county players, managers and coaches at all levels, schools and our supporters – then the plan won’t succeed.

“While the appointments are important, buy-in is critical.”

There are plans to have the county’s senior footballers train at different venues and also to play next season’s McGrath Cup fixtures in West Cork, which has long been the spiritual home of Cork football.

Given the costs involved, how will the plan be affected by the recent controversy surrounding the redevelopment of Páirc Uí Chaoimh and the budget over-run on the new stadium, by nearly €25m to €110m according to Croke Park stadium director, Peter McKenna?

“Not at all,” says Kennedy. “There has been much made of the situation of the stadium finances in the last few weeks but we have set up a separate stadium company so its finances won’t impact on the day-to-day operations of the county board. The main costs are in relation to the appointments and a number of them don’t require new finance – we have GDOs (Games Development Officers) anyway.

“The High Performance Director is an appointment we were going to have to make anyway in order to streamline the whole area of strength and conditioning. I’m confident that we can fund this but we also have a funding pillar built into the plan, a finance sub-committee with a remit to develop financial strategy for the county board as a whole.”

The Cairde Chorcaí fund-raising body, established to help the board with team costs, will be represented on the sub-committee.