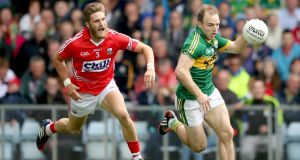 Cork’s Eoin Cadogan and Kerry’s Darran O’Sullivan, who has left his job in the bank in order to become a full-time footballer. Photograph: James Crombie/Inpho

Finding a cushy job to help prolong an intercounty playing career is one thing, leaving a secure job to help save it is another. Yet Darran O’Sullivan says he would have “cracked” had he not left his job with Ulster Bank to effectively become a full-time Kerry footballer.

At age 28 and reduced to minor cameo roles in Kerry’s All-Ireland success last summer because of injury, O’Sullivan handed in his notice last November: based at the Ulster Bank headquarters in Dublin, the five-hour commute to and from Kerry training, sometimes three or four times a week, was taking a physical toll, but even more so mentally, especially as he struggled to return to match fitness after a hip operation in 2013.

Indeed the physical wear and tear of his 10 years playing senior intercounty football actually necessitated that operation, and towards the end of last year, O’Sullivan realised that something would have to give if he was to continue playing with Kerry into 2015.

“But I’m looking at my football career: I’m 28 now, there aren’t too many years left, so I just wanted to get the most out of it. And the job just wasn’t suiting me. I was there seven years, had a great time, learnt a lot, but I just couldn’t see my future there, and it just wasn’t ideal in terms of getting my body right. I knew I needed to focus more time on it, to properly rehab.”

So O’Sullivan is now back living in his native Glenbeigh, and not surprisingly, some people are wondering why he left such a secure job and returned home to nothing but football: “Some people were saying I was mad, or hoping I might go part time. But I felt that would put me under even more pressure. Obviously, financially, I have to be cuter now, with the money. I’m not going out for too many dinners, or anything like that.

“Mentally, that was draining, and I was going into work and not getting a great kick out of it. I enjoyed the people I was working with, but there was no challenge in it for me. I just felt if I kept doing it over again I’d have cracked. I needed to make the change, have more time for the training.”

O’Sullivan is not completely idle outside of football and has taken up a role as one of the new athlete mentors with the Sky Sports Living for Sport initiative: indeed speaking at that launch event, he stressed the importance of having some distraction outside of football.

“Doing the bit with Sky Sports, as an ambassador, is great for the mind, to be honest, just meeting kids and having the chats. It’s keeping me kind of sane too, because you’d get bored only doing the same thing. But other than that I’m just working on the body.

“I can’t keep taking it for granted, saying I’m Superman and taking the knocks. I had to change bits and pieces. Not just what I eat, but not sitting down too long. Even driving home to Kerry after days like this, I have to get out of the car for a stretch. So that’s me at the side of the road with my rope, doing my stretching.”

He will also miss the opening rounds of the league to ensure his body his 100 per cent right, and more specifically the hip and hamstring area, which forced the operation in 2013.

“My problem was a small bit degenerative. But the surgeon in Coventry who did me also said it could be more common in Gaelic football because of the way we’re constantly bending down to pick up the ball, and hunched over, when we’re getting hit. Players are also getting bigger and stronger, so when we’re getting hit in that position, we’re even more vulnerable.

“I was originally told four to six months, but the doctor later told me it’s actually a year, because of all the niggles, and I actually found that out the hard way. I went from doing nothing, to over-doing it, and the body just kept breaking down, stupidly on my behalf. So I’m being a bit extra cautious this year, and don’t make the same mistakes.”