Darragh Ó Sé: Kerry are there to be beaten if Cork target midfield 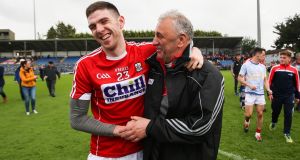 Yeah, yeah. I know what you’re thinking. Go away out of that, Darragh. Tipping Cork for this Munster final is cute-hoorism taken a step too far. Pure plamás. Peak yerra. But I can only tell you what’s in my head and something about the way the games have gone over last few weeks has got me taking another look at Cork.

Everybody knows the old story about the fella lost in rural Ireland who stops and asks for directions, only for the farmer leaning on his gate to go: “Well now, I wouldn’t start from here anyway.”

I think the opposite applies to Cork in this case. If you were Cork and you wanted to pull off an ambush against Kerry, I’d say this is exactly where you’d start.

They hit rock-bottom by scraping past Waterford but then found a new rock bottom by only scoring a point in the first half against Tipperary. One thing we can be sure of, they can’t go any lower.

I’m just looking at this as a player. Wouldn’t you love to be in that position? Going to Killarney with nobody expecting a thing from you. Kerry full sure they’re going to make a show of you. One of the best things you can have in your locker is knowing you are better than the opposition thinks you are. By the time they find out, it can be too late.

People talk about the one point scored in the whole of the first half against Tipperary. Obviously, that’s not good. But what I took away from that Tipperary game was the goal they scored to win the game at the end.

Two things about it struck me. One, when it was absolutely needed, when they were hanging out over the edge of the cliff with no options left, they were able to put together a well-worked move that went the length of the pitch. They were controlled in possession and hell-bent in the way they ran the ball up the other end having conceded a killer goal themselves.

If Cork played that way all the time, nobody would be dismissing them. They threw themselves into that passage of play with absolute reckless abandon. To me, that shows they have it in them – all they need is the right motivation and mindset to bring it out. If they find that against Kerry, as has happened countless times down the years, then they have a chance.

The other thing that stayed with me from that goal against Tipperary was the reaction of the crowd. The Cork crowd can always be watery enough. There’s never enough of them for a start, unless they get to an All-Ireland final. And they always strike me as wanting to be impressed. They’ll always give the hurlers a bit more leeway and I know the footballers can sense that.

But once that goal went in against Tipperary, they reacted in a way I haven’t seen from a Cork crowd for a long time. They let themselves go. They were overjoyed by it. Players being players, you can only feed off that. It’s a glimpse of what is possible and these Cork players wouldn’t have seen the likes of it in a long time. What better place than Killarney to see it again?

I don’t accept the line of thinking that they can’t target Kerry. The way the game is being played this summer across the country, I think it suits Cork better than other teams. Because of the mark, goalkeepers are kicking long to midfield again after a few seasons of constant chipping kick-outs to the corner-back and building from there.

The game is coming full circle again. It’s getting back to the point where if you dominate the middle third, you dominate the game. Win midfield and you give yourself a platform for the rest of it. That hasn’t been the case for the past few years but you can see it moving back that way now.

Since I finished playing in 2009, it’s a very rare thing for me to miss it. But I was watching Brian Fenton on Sunday for Dublin against Westmeath and thinking what a joy it would be to be able to still do that. He was floating through the air at times, pulling down kick-outs, moving the play on completely at will. Not many people get that thrill in life.

Kildare v Meath was a perfect example of the shift in emphasis this year. Kevin Feely and Tommy Moolick schooled the Meath pair from kick-outs and Kildare built their game from there.

Monaghan were dominating against Down for the first 15 minutes when Kieran Hughes was lording it from kick-outs. But because they didn’t press home their advantage, Down were still in touch when they moved the midfield battle back in their direction. Conor McManus was is magic form inside but Monaghan couldn’t get him the ball.

This sort of game plays into Cork’s strengths. With Aidan Walsh and Alan O’Connor in midfield, they should be attacking the Kerry kick-out. Kerry need a platform and they will look to David Moran and Jack Barry to give them that. If they can dominate around the middle, they can spring the likes of Peter Crowley and Tadhg Morley at pace going forward.

So Kerry will kick it out long, you’d imagine. If it turns into a 50-50 battle in the air, Cork have the tools to compete. If they can get on the front foot and improve their shooting – I accept they need to improve it out of sight – there’s no reason they can’t be there when it matters coming near the end.

By that stage, Donncha O’Connor will surely be on the field and he’s the form forward around at the minute. He lives on the Kerry border and he must be ravenous for success against them. You can’t teach that kind of hunger. I just think that they have so much motivation here.

I fully accept that I could be here next Wednesday trying to save face for tipping Cork. But I really don’t think it’s that crazy a shout. This is Cork v Kerry, remember. You might think it’s a foregone conclusion but I’ve seen too much of this fixture to accept that.

We played them in 2002 and they beat us after a replay. We were after beating them in 2000 and 2001 and we went in cocky. The draw was played on a miserable day in Killarney when everybody else in the country was watching Ireland play in the World Cup in Japan. We weren’t plugged in but we got out with a draw and presumed we’d win the replay.

At halftime in the second match, we were 0-7 to 0-4 behind but we deserved to be much worse off than that. They were giving us a right hiding but just weren’t converting the goal chances they were creating. We went into the dressing-room ahead of the management and started trying to sort it out ourselves. I was captain and I was there trying to rally the troops.

Colin Corkery was having a field-day on Tom O’Sullivan, just bullying him the way Corkery was able to do sometimes when he was on form. Tom was watching the game, making no impression on Corkery at all. So Declan O’Keeffe – our goalkeeper and a clubmate of Tom’s – turned to him and said, ‘Jesus Tom, would you not get stuck into him?’ And Tom, who was no shrinking violet when it came to that stuff, just looked at him and went, ‘Have you seen the size of the f**ker?’

(There’s a time to laugh and a time not to laugh. This was not a time to laugh. But I only just kept it in. I was in the middle of it, trying to be all responsible and Sullivan had me nearly in stitches. I can still hear the exact tone of his voice. ‘He’s about six-foot-five and 20 stone, like!’)

That’s why Cork were always an enigma. Corkery was no bigger or smaller that day than any other year we played them. But sometimes he turned it on and no matter what you did, he was unstoppable. He scored a point that day and went off waving to the crowd. It was hard for us to swallow but you couldn’t argue with it. He was taking us to town. He was the sort of Cork footballer we hated – you couldn’t trust him to be consistent.

So maybe it’s because of days like that that I still always carry a fear in me when Kerry are coming up to Cork games. Especially in this sort of circumstance when they’re given no hope. Cork always have a hope when they play Kerry. Always. Kerry are the rightful favourites. But I can see Cork winning by a couple of points.

1 Gordon D'Arcy: Ireland must conquer fear on a scary Halloween in Paris
2 Cian Healy: ‘Realistically I got away with murder when I was younger’
3 Cork City expected to approve €1 takeover by Preston owner
4 Dave Heffernan delighted to have banished bad memory of his first cap
5 Seán O’Brien: Anger over my parents’ break-up never left me
Real news has value SUBSCRIBE

Gordon D’Arcy on a Halloween thriller; Will an empty Hill derail the Dubs? 07:51
Gordon D'Arcy: Ireland must conquer fear on a scary Halloween in Paris 07:55
Seán Moran: Will a silent, empty Hill help to loosen Dublin’s grip on Sam? 07:55
Dave Heffernan delighted to have banished bad memory of his first cap 06:00
Cillian O’Connor rejuvenated and eager to resume Mayo’s quest for glory 06:46