New normal is six minutes of stoppage time, which is enough for games to change utterly 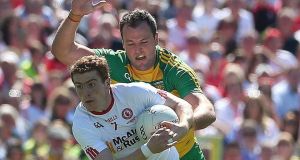 Tyrone’s Peter Harte keeps Donegal’s Michael Murphy at bay during the Ulster final in Clones. Harte’s winning point was an absolutely mighty score, no doubt about it. But would Donegal have given up that space in the middle for him to run into inside the opening 10 minutes? Not a hope. Inside the opening hour? Pretty unlikely, I’d say. Photograph: Lorraine O’Sullivan/Inpho

Watching Tipperary’s win over Derry last Saturday, you had to love how they kept going. It was clear as day to everyone that both teams were banjaxed in injury-time at the end of the game and when you’re that tired physically, it doesn’t take a lot to finish you off mentally. Normally, Derry scoring 1-1 to go two points up just as the clock hit 70 minutes would do the trick. Game over, ball burst. Well done Tipp, sure ye were in it right to the end.

But Tipp didn’t die. They kept at it. They didn’t panic either, or go looking for a goal that wasn’t there. Instead, they chipped away and tipped away and scored three points to win the game. It was fantastic stuff.

One thing that struck me though watching it was that they wouldn’t have got the chance to do it in other years. Before this, two minutes of injury-time was the norm. The odd time you’d see three. But this summer referees have been adding five or six minutes at the end of every game. It’s an x-factor to the championship that hasn’t really been talked about but it’s going to be more and more crucial as we get down to the serious stuff.

These games are 80 minutes long now. It’s obvious that referees have been told to add time properly this year instead of just throwing a couple of minutes on at the end like they’ve always done. It might only seem like a small thing but I’m certain it will be a factor in deciding a big game before the year is out.

What it will mean, of course, is that the best teams with the deepest panels will be the ones who come through. Donegal are a serious team but in the Ulster final, they had to bring Anthony Thompson back onto the pitch after taking him off. Would Dublin do that? Would Kerry? Tyrone?

We’re heading into the period where the men will be separated from the boys. Over the coming weekends, games are going to come down to who has the best players on the pitch at the end. If you’re telling a sub to warm up with 55 minutes gone, he’s not just going in to fill space for the rest of the game. With every minute that goes by, the players he is up against are getting weaker. They’re hanging on and wishing the end would come.

Who is best equipped to deal with that? Dublin are able to bring on guys who would start on any other team in the country. Kerry are moving players around and aiming to be the same. Most teams don’t have that luxury so this is an added advantage for big teams.

It totally changes the dynamic of games. I knew players who made an art form of needling the ref to blow up late on. You’d be leaning on him and telling him it was nearly getting dark out here. But when the man on the line is putting up six minutes on the board, you’re a long way from home if you’re starting that sort of carry-on.

A lot of the time so far, it hasn’t mattered. We’ve all been at games this year where there’s an ocean between the teams coming near the end and they announce an extra six minutes. The groans in the crowd sound like kids who’ve been given extra homework. But there are only 10 teams left and the hidings will be scarce from here on out. Those six minutes are when most games will be decided.

These games are like the Grand National now. Everything is cagey for the first circuit and it’s a matter of taking stock and seeing who’s still standing when the race really starts. The Ulster final was the perfect example. It was a game where nobody tried anything out of the ordinary in the first half, with the exception of Ryan McHugh.

But then, once the clock passed 60 minutes, everyone played like their lives depended on it. The score was 0-9 apiece on the hour mark but it ended 0-13 to 0-11. So you had a quarter of the total points in the game kicked after the 60th minute. Everybody has been dismissing Donegal and saying they’re gone but at the start of injury-time, they were leading 0-11 to 0-10. In other years, it might have been enough.

Look at it this way. Let’s say David Coldrick had only added three minutes. Seán Cavanagh kicked the equaliser with 71:28 on the clock. By the time the Donegal keeper kicked it out, it was coming close to 72 minutes. In other years, Donegal would have killed the clock at that point – throw around a few handpasses, work a few frees and sit tight for a replay.

But he didn’t add three minutes, he added six. So Donegal had to keep playing. Tyrone knew this so they pushed out on them to see where they would go. This is the significance of the extra minutes – instead of a game fizzling out, now you have tired players making decisions at a time when some of them just want it to be over.

And then, lo and behold, Donegal got a free 60 metres out. It was just about on the spot Michael Murphy had kicked a free from a few minutes earlier. As he was walking over to take it, the clock passed 73:00. Again, in other years, this would have been the last kick of the game. One kick to win it all, Michael. Let’s see if you have it.

But Murphy was done at that point. You could see it in him – he’d spent the game making every run, taking every hit and by now he was knackered. When it came down to it, he didn’t have the kick. Even Jesus only had so many miracles.

Normally, that would have been that. Coldrick would have whistled it up and we’d be going again six days later. When Niall Morgan put the ball down for the kick-out, the clock passed 74:00. For as long as we’ve been playing football, you’d nearly need to have a murder on the pitch for a ref to be thinking he still had work to do after 74 minutes. At least there’d want to be a damn good row to sort out.

At that stage of the game, people are dead to the world. They make mistakes. They take shortcuts. They take chances. They hope. They do all the things they would never do at the start of a game. If you’re smart and you’re tuned in, they give you a chance.

All the Donegal lads retreated from the kick-out to get back into position. But they went too far. It was only maybe five to 10 metres deeper than they usually would but it was enough. They put their heads down and ran back inside their 45 but you could see as they went how tired they were. They followed the ball a bit more than usual and left space in the middle. When the ball was dished out to Peter Harte, he ran onto it and kicked the winner.

It was an absolutely mighty score, no doubt about it. But would Donegal have given up that space in the middle for him to run into inside the opening 10 minutes? Not a hope. Inside the opening hour? Pretty unlikely, I’d say.

The mental test is bigger than the physical one at that stage in the game. Any mullocker can run another mile if he really has to. Those Donegal players were tired but they all still got back. But fatigue in the mind is far more serious than in the body because it turns you into the sort of player you don’t want to be – unsure of yourself, cranky, rash, a bad decision-maker.

This is the year to take advantage of this. This is something new in the evolution of the game that will eventually become the norm. Players are fitter and stronger now than when I retired and they’ll be fitter and stronger again next year. But this isn’t something they could have known was coming down the tracks so there’s room here for smart teams to target.

It will suit the bigger teams, yes. But it will also suit the teams who have the right attitude for it. If you saw the Tipperary players interviewed afterwards, you could see that this was something they had prepared for. They were prepared to keep going until the end no matter what. They knew there would be time if they kept doing the right thing. They were big enough and bold enough to kick 30-metre passes around the place looking for space. That’s not a team dying for the end.

Tipp were ready for what the game would throw at them. They won’t win the All-Ireland but whoever does will have to manage a spell of injury-time as well as they did. It’s going to be a factor in where Sam Maguire spends the winter.