Darragh Ó Sé: Hats off to Dublin – they’re a country mile better than the rest 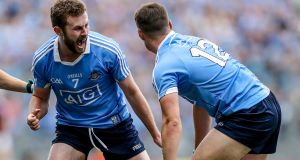 Dublin’s Jack McCaffrey celebrates with Brian Howard as his side wins a free against Galway in the All-Ireland SFC semi-final at Croke Park in August. Photograph: Tommy Dickson/Inpho

It’s a long time since I can remember the atmosphere in the aftermath of an All-Ireland final being like this. Dublin are so far ahead of everybody that it seems to have taken all the air out of the sport. It’s just so hard to see where their challenge is going to come from.

Sitting here today, Mayo and Kerry don’t even have a manager between them, Tyrone, Galway and Donegal were all dealt with handily by Jim Gavin’s team, and Monaghan couldn’t beat Tyrone when it mattered, so what chance would they have against the Dubs? Cork are a mess, Roscommon and Kildare lost four games apiece in the championship and, after that, you’re well into the also-rans.

You have to take your hat off to Dublin. They are a country mile better than everybody. They are at the pinnacle of the game in every aspect – skills, physicality, decision-making, game-management. It’s a pleasure to watch them. it would make you itch to be young enough to go out there against them and see what it’s like to try to perform to that standard.

I sometimes try to explain the top level of inter-county football like this. Everything comes down to speed. I don’t really mean speed in your legs, although that’s obviously a big part of it. What I mean is that your ability to survive and thrive at the top level is totally dependent on how quickly you can do the right thing in any given situation.

Let’s say you’re a good footballer in whatever county. You do well for your club. Your attitude is good. You eat properly, you do your gym-work and a bit more besides. The word goes around that you’re a leader, you’re made of the right stuff. County championship comes around and you stand out in a few games. You’re thinking quicker than the players you’re up against, getting to the right place quicker, seeing a killer pass when everyone else thinks you’re bound to shoot.

Next thing you know, you’re in with the county. You’re the sort of player they need. That’s the next step and you’ve earned every bit of it. And you get there and everything is that step quicker. You do a kicking drill and you’re pinging balls into fellas’ chests and it’s all fine, but then the speed goes up and you hit one astray and now you’re like yer man in Tin Cup, shanking his shot and turning around to the crowd and going, ‘Who hit that? Anyone see?’

The little jink you use to get away from club players works the first time you try it in county training, but not the second. You have to learn to do it quicker, not to signpost it, to only use it when it’s going to work. Bit by bit, you learn what you can and can’t do. And your rise up through the levels – squad man, matchday 26 man, league man, championship man – simplifies in a fairly ruthless way. It comes down to what you can do well quickly.

Look around that Dublin team. Start with Stephen Cluxton. Everybody knows he changed the game for goalkeepers with his kick-outs, but forget about his accuracy for a second – the one thing he is always, always trying to do is get the ball away quickly. Fast ball, fast ball, short, long, whatever. His primary thought is to get Dublin moving. Why? To test the opposition to see what they can do when the pace of the game is high.

Go through the rest of them. Again, I’m not just talking about the raw speed of the likes of Jack McCaffrey or Eoin Murchan or Paul Mannion. Obviously, those are major assets too, but I’m talking here about a more general sense of quickness. You wouldn’t say James McCarthy looks like the fastest man in the game but when does he do anything at less than full tilt? He gets on the ball and suddenly, he is a double-decker bus that has to be stopped. Good luck with that.

When the pace got ratcheted up, Tyrone’s cracks started to appear

Or take someone like Dean Rock. Again, you wouldn’t say he was the speediest Dublin forward by any stretch of the imagination. But go back and look at how quickly he took his shots for those two points in the first half against Tyrone when Niall Morgan’s kick-outs came under pressure after the first goal. Bang-bang, no dithering, no worrying about the two frees he’d missed earlier. Just split-second, no messing, over the bar.

This was the glaring difference between the teams on Sunday. When the pace got ratcheted up, Tyrone’s cracks started to appear. All-Ireland final day is the top of the pile. That journey that started off with you getting called into the county panel because you were doing well for the club, this is where it was leading to all the time. This is where that basic requirement to be able to do the things that make you a good footballer – and most of all, do them quickly – gets its ultimate test.

Tyrone don’t have bad footballers. No more than Galway or Kerry or Monaghan or Mayo or any of the other chasing pack have bad footballers. You don’t get to survive or prosper at this level if you’re not a real talent. But when the gas gets turned up high and everything starts happening that half-second quicker than it has before, that’s when you get found out.

There was a passage of play on Sunday, just after Jack McCaffrey put Dublin 1-5 to 0-6 ahead about 10 minutes short of half-time. Tyrone got the kick-out away – quickly, as they had to – and Conor Meyler played a ball up to Peter Harte on the Dublin 45. Harte collected it at the right-wing forward position with Jonny Cooper shadowing him. Cian O’Sullivan was in the area but his hamstring had gone by this stage so he wasn’t moving freely; so not only was he not threat to Harte but he was no use as a sweeper either.

The upshot of it all was that as Harte collected the ball, Connor McAliskey was one-on-one with Philly McMahon standing on the 20-metre line dead straight in front of the Dublin goal. The only other person inside the Dublin 45 was Cluxton. McCaffrey was still getting back after his point and for once, Dublin were open.

You could tell that Harte knew this. Tyrone had been under the cosh for the previous seven or eight minutes but this was their chance to turn the game back in their favour. Harte is a smart player – one of the real leaders in the Tyrone team – and you could see he recognised the moment. If he could come up with the right ball into McAliskey and if he could deliver it quickly, there was a goal on.

But in his rush to get the ball in, he made a mess of it. He tried to play a bullet ball in with the outside of his boot but got a bad connection and screwed it off out to the side. From a starting point in front of the goals, McAliskey had to sprint after it and ended up sliding like a soccer player trying to put it out for a sideline about four yards from the corner flag. He didn’t manage it and, as Cluxton was lining up to take the kick-out, O’Sullivan went off injured. That small window of weakness in the Dublin defence was slammed shut.

I don’t want to focus on one mistake – anybody can give a bad ball. But that one in particular felt like it summed up the distance between Dublin and the rest for me. Harte was able to do the basics under pressure – make the smart run, draw the defenders to make the space, realise that the big moment in the game was on. But when it came down to it, he didn’t execute.

Against the Dubs, you don’t get a second go at that. From the kick-out, Cooper went down on a breaking ball, took a push in the back from a helpful Tyrone player, got to his feet and played a quick free as the three Tyrone lads around him switched off and next thing you know, Dublin had their second goal.

But Mayo have their own problems now. And, as far as I can see, everyone else is a mile off.