Liam Cahill happy to give his players some clarity

‘It can also be a mental burden, that feeling that you have to be constantly on’ 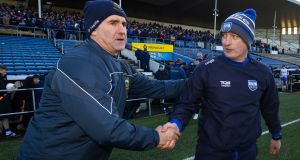 Tipperary manager Liam Sheedy shakes hands with Liam Cahill after the Division 1A clash between the counties in March. Photo: Tom O’Hanlon/Inpho

This would have been a strained few days for Liam Cahill, no doubt about it, his body clock ticking inevitably towards a weekend collision of contrasting emotions.

The new Waterford manager was scheduled to face up to his native Tipperary, the county he guided to the last two All-Ireland U-21/U-20 titles, at a heaving Walsh Park this Sunday.

If Waterford had won, picking up a first win in the Championship since the 2017 All-Ireland semi-final defeat of Cork, how would Cahill have celebrated?

Likewise, if the All-Ireland champions had got their bid for back-to-back titles off to a winning start, would he have experienced any lingering sense of pride?

It had all the ingredients for a humdinger yet here Cahill is now, talking about how he stepped out ahead of yesterday’s GAA guidelines by releasing his players last week from their individual training programmes.

Nowhere in his lengthy list of plays, plans and contingencies for 2020 was there provision for cutting training at the beginning of May.

For Cahill, it was all about offering a little bit of clarity for his players in a time of chaos and he’s glad that the GAA have now advised all county squads to follow suit.

“That was 100 per cent the whole idea, to offer them a little bit of clarity,” said Cahill. “There are a lot of people far more qualified than me who will tell you that keeping physically active and keeping your mental health right is very important, and of course it is, but it can also be a mental burden, that feeling that you have to be constantly on, constantly training to meet the demands of Championship hurling.

“That was why we did it and look, yes it’s a balancing act but we’ve asked them not to lose total accountability but to also realise that we’ve taken away that rigid strictness of a training programme.”

Cahill’s ears naturally pricked up when Taoiseach Leo Varadkar talked loosely on The Late Late Show of a potential Championship in “August and September”.

Unaware that the GAA would shortly suspend all county training, he could have been tempted to convene another Zoom call and to revoke the free passes he’d just handed out.

“Ah, not really,” he said. “It did give everyone a bit of a lift that there might be a possibility of a Championship or of games at least, be they club or county games, before the end of the year. Other than that, the time frames are still quite a bit away.”

It’s a fluid and constantly evolving situation which can’t be easy for a new senior inter-county manager, in a new county.

“I suppose my unbeaten record in the Championship remains intact anyway,” smiled Cahill. “No, look, it’s fairly disheartening and I imagine Sunday will be a downer when we should have been out facing Tipperary. You’re still plotting and thinking, of course you are, it’s a massive part of you and you never really turn off but you have to just get on with it.”

The former Tipperary attacker had been making solid progress in Waterford. The Allianz League began with a rollicking one-point win over Cork. They beat Galway by the same margin and had secured a quarter-final place against Kilkenny when their game of musical chairs suddenly stopped.

“For me, it was really starting to get interesting,” said Cahill. “A few options were starting to develop, more competition within the panel than options I suppose, real competition for places. Things seemed to be headed in the right direction but you never know until the Championship, that’s the beauty of it and we would have gotten a few answers this weekend.”

If there’s any positive to be taken from the situation, it’s the freshness that older players and those carrying injuries will take from the lay-off.

“Tadhg de Burca is now getting an opportunity to get his injury right,” said Cahill, referencing the key defender who suffered cruciate knee ligament damage last September. “He’s just one of a number of fellas who had niggling injuries, fellas that you’d have said, ‘We could play them in the first round but we’d be taking a chance’. So all those guys should benefit and there is a positive in that respect.”

And the negatives? Well, there’s no end to those.

“It’s the long evenings, isn’t it?” said Cahill. “It should be grab-the-gear-bag time and get out for as much hurling as you can before dusk. We’ve already missed six or seven weeks.”