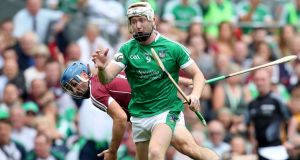 The Gaelic Writers’ Association awards, presented at the association’s annual dinner on Friday night, turned into a family affair in the hurling category, as former Limerick star Ciarán Carey was inducted into the Hall of Fame at the same time as his nephew Cian Lynch was named Hurling Personality of the Year.

Carey, who now works as a counsellor in the Cuan Mhuire Residential Treatment Centre as well as in his own practice in Limerick city, was a key player on the county teams that came so close in the 1990s to winning the All-Ireland and he is particularly associated with the famous defeat of then champions Clare in the Gaelic Grounds in 1996 when he scored the winning point.

His nephew was also a major influence on the current team’s march to a first All-Ireland in 45 years, with his creative play from centrefield earning him a Hurler of the Year nomination and almost certainly an All Star when the awards are announced next week.

In football, Monaghan’s Conor McManus, arguably the best forward in the country over the past five or six years, was named Football Personality of the Year. He had the bitter disappointment of losing the All-Ireland semi-final against Tyrone by a point, dashing the county’s hopes of a first final since 1930, but was a vital influence in the county’s progress, which saw them top their group in the quarter-finals.

He has been an exceptional performer in the International Rules series, twice in the past four series ending as Ireland’s top scorer.

Football’s Hall of Fame award went to Down’s Mickey Linden, who made his debut in 1981 and went on to win a national league in 1983, two All-Irelands in 1991 and ’94 and in the latter year picked up an All Star and Footballer of the Year accolade.

Just recently he scored off the bench for his club Mayobridge in a reserve final – at the age of 55. His phenomenal pace, which stayed with him far later than is usually the case with footballers, remains important as he is competing successfully in veterans’ athletics.

Donal Keenan was the winner of the Lifetime Achievement award. From Roscommon his career began with the Roscommon Champion and continued with the Irish Independent, Sunday Times, The Title, Ireland on Sunday and the Irish Daily Mail.

Finally, Hugh Lynn – another Roscommon man – was named as PRO of the Year. A teacher at Abbeycarton National School in Elphin, and a columnist with the Roscommon Herald. A member of the Éire Óg club, Lynn has been county PRO since late 2015 and was cited for “his co-operation and professionalism in dealing with the media”.

Personality of the year: Conor McManus (Monaghan) Hall of Fame: Mickey Linden (Down)

PRO OF THE YEAR

1 Tour de France: Every yellow jersey winner must feel guilty by some association
2 49 and out for Corofin as their long Galway reign is ended
3 Bielsa delighted with improved defence as Leeds move for Cantwell
4 Kevin Babington: Learning to live again after life changed forever on Long Island
5 Wawrinka shows Andy Murray no mercy on opening day of French Open
Real news has value SUBSCRIBE