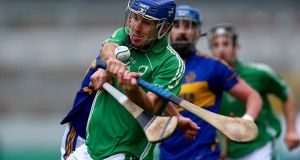 Brian Carroll: Coolderry clulbman made 131 appearances for Offaly in league and championship since making his debut in 2002. Photograph: Donall Farmer/Inpho

Offaly’s bright start to the new hurling season has been somewhat shadowed by the news that long-serving forward Brian Carroll has retired after 14 seasons.

The 32-year-old will continue to play with his club, Coolderry, but has decided against returning to the Offaly county set-up under new manager Eamonn Kelly.

Kelly – who moved to Offaly after a successful tenure with Kerry – did enjoy an encouraging start to his new year with a 30-point win over Dublin IT in Sunday’s opening round of the Walsh Cup.

But while there were some hopes that Carroll might still return in time for the Allianz Hurling League, he has decided instead to walk away, after making 131 appearances between league and championship.

“It is with both satisfaction and sadness that I announce my retirement from intercounty hurling,” said Carroll, the son of former Offaly All Star and All Ireland winner Pat Carroll, who made his debut with the county back in 2002.

“For the past 14 seasons I have been privileged to play for Offaly and got to fulfil my boyhood dreams of captaining my county in 2010, playing in a Leinster final in Croke Park in 2004 and, probably most importantly for me, the general buzz of playing intercounty hurling with and against the best in the country.”

As well as captaining Offaly in 2010, Carroll was the only remaining link to the Offaly team that competed in their last Leinster hurling final, in 2004, where they lost out to Wexford. He also featured prominently for both St Kieran’s College in Kilkenny and subsequently for UL in the Fitzgibbon Cup.

“I remember playing my first game at under-14 level in the Tony Forristal competition as fondly as my last game against Clare at senior level 20 years later,” he added.

Jamie Clarke will not be part of the Armagh senior football squad this year, Kieran McGeeney has confirmed. The forward has informed the team manager that he will return to the United States on the conclusion of Crossmaglen’s AIB All-Ireland club championship campaign in the spring and won’t be part of the Orchard County panel in 2016.

1 Ireland backrow of O’Mahony, Van der Flier and Stander to be retained against England
2 ‘Your father works for my father’: Schools rugby turning toxic in the stands
3 Triple bogey costs Rory McIlroy as Adam Scott prevails at Riviera
4 Newcastle feel the heat as Arsenal get some of their old mojo back
5 On healing and wild hurling: The re-education of Diarmuid Lyng
Real news has value SUBSCRIBE