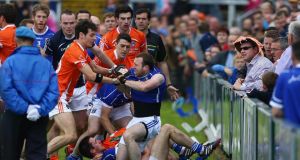 Armagh’s decision to avoid the media appears to stem from the punishment handed down for their involvement in the pre-match brawl which marred their Ulster quarter-final win over Cavan back in June. Photograph: Inpho

A press briefing scheduled for yesterday – issued by “the GAA and Armagh County Board” and due to be attended by Armagh assistant manager Peter McDonnell and team captain Ciarán McKeever – was cancelled at short notice, a decision which again appears to stem from the punishment handed down for Armagh’s involvement in the pre-match parade brawl which marred their Ulster quarter-final win over Cavan back on June 8th.

According to Croke Park, “the GAA at Central Level is endeavouring to ensure that Armagh players and management figures will be available for interview at Croke Park this weekend”, although in the meantime Alan Milton, the GAA’s head of media relations, has admitted that no penalty currently exists for counties refusing any media obligations.

“Obviously we’re doing our best to end the impasse, but they still seem to have issues. No team or players are obliged to do media interviews, and there is no penalty either. We’re still trying to resolves the issues here, and we wouldn’t like to go down the route, either, where everything we do has to be done or else there’s a penalty. The vast majority of counties do cooperate in that regard as much as they can.

“We’re doing our best to come to some conclusion here, and hope the players and management will be available to promote the game. They are amateur players, and we’re indebted to them for the media promotion work they do, but I can’t recall a clampdown like this, ever.”

Last week, however, McDonnell did give an interview yesterday to Gaelic Life newspaper, claiming that inaccurate reporting was now the main motivation behind their media ban.

“We would strongly feel that we have been disrespected and dismissed and portrayed inaccurately,” says McDonnell, who previously managed Armagh for two seasons, 2008-09, then came back on board again as assistant manager under current manager Paul Grimley.

“A false impression is created and sought to be created, and not just during this year, but during previous years. And to that end, until resolution is achieved there will be a coolness and, indeed, an absolute and total failure to communicate with certain elements of the media.”

Donnelly has been part of the management set-up since 2005 as assistant manager to Harte, and McCann has been the senior team trainer for the same period.