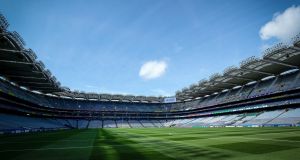 The hurling quarter-finals are returning to Croke Park. Photograph: Inpho

For the first time since 2010, this year’s All-Ireland hurling quarter-finals will be held in Croke Park.

The hurling double header was announced on Tuesday, as well as the fixture details for the first two rounds of the football championship’s Super 8s series.

On Sunday July 14th, beaten Leinster finalists Kilkenny will play the winners of Cork/Westmeath at 2pm, before beaten Munster finalists Tipperary face Dublin/Laois at 4pm in the last eight of the hurling championship.

The first round of the Super 8s - which as of last year replaces the traditional All-Ireland football quarter-finals - sees the four provincial winners have home advantage against one of the qualifier winners.

On Saturday July 13th, Connacht champions Roscommon will begin round two with a home clash against the winner of Cavan and Tyrone (who play this weekend) in Dr Hyde Park at 5pm. At 7pm in Croke Park, Leinster champions Dublin take on the winner of Cork and Laois.

The following day, in a direct clash with the hurling, Ulster champions Donegal host Meath or Clare at 2pm in Ballybofey, and Munster winners Kerry play Galway or Mayo at 4pm in Killarney. So it’ll be interesting to see which two games are shown live on television.

The following weekend is the Croke Park round, where every team other than Dublin plays in a neutral venue. In round two the two provincial winners in each group meet and the two qualifier teams do likewise. So on Saturday July 20th, Cork/Laois and Cavan/Tyrone will throw in at GAA HQ at 5pm, before Dublin host Roscommon at 7pm.

The following day in Croker, Kerry and Donegal is at 4pm, after Galway/Mayo play Meath/Clare. Round three of the Super 8s can’t be fixed at this stage as the qualifier winners will have home advantage. So Roscommon will be heading for Laois or Cork. Dublin will be up north to take on Tyrone or Cavan. Kerry will be travelling to either Navan or Ennis, and Donegal will be out west against Mayo or Galway.