Gaelic football makes its mark and the Gael’s heart soars 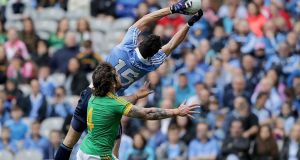 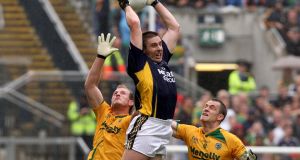 What the polar ice cap is to the world’s scientists, the high fetch is to the custodians of the GAA. Gaels have for decades worried and fretted over the disappearance of what amounts to a priceless artpiece in the fluid world of Gaelic football. For years they have warned a world that won’t listen that the high catch, or what connoisseurs refer to as “the fetch”, was in grave danger of becoming extinct, until finally they decided that the time has come to act. And so, to little fanfare and less controversy, the GAA this week drafted the paperwork and signed the dotted lines which have moved “the mark” from proposal to reality.

The mark promises to make bountiful once again the endangered species of the high-flying, all-catching midfielder. It promotes, by way of giving the player an option of “calling” for the Australian rules and rugby union liberty of translating the completed catch into an unchallenged kick to a team-mate or a shot at goal. Because it is confined to catches made from the kick-out in Gaelic football, it has the potential to limit the unsightly growth of the short restart, which many feel is in danger of destroying not just the game but Irish life in general.

If there is a sort of Joe Duffy hotline number for Ireland’s top GAA referees – and if there isn’t there should be – you can bet its lines are jammers right now. The mark is just another rule for them to learn, another detail to absorb, and a further all but ungovernable rule which seems specifically designed to discourage the better angles of the Gael’s nature from flourishing.

Ever since the first ball was kicked skywards, Gaels have been in unanimous agreement that there are few more majestic sights on this good earth than that of a fellow Gael filling the sky for a few heart-stopping moments, defying both the laws of gravity and, depending on the era in question, quite a few swinging fists, in order to catch a football high over head. What he did with the bloody thing afterwards was irrelevant.

In fact, pulsing with the adrenaline caused by having made the catch and the instant explosion of approval emanating from the stands, his next act might well have been to effect an ambitious and wildly ill-advised thump of the ball down field, which would instantly return possession to the other side. But that didn’t matter. The mere fact of the catch – and the general feeling of wellbeing it invoked – could change the entire mood of a match.

So you can take your fabled goal-poachers and lethal long-range specialists and exquisite playmakers – the man who could fetch a high ball exists in a realm of his own.

And they have been a distinct species, the high-fielder, from the immaculate high-fielding style of Mick O’Connell to the counter-cultural abandon with which Brian Mullins caught high balls in the smoggy skies of Dublin throughout the 1970s, to the summer sightings of Willie Joe Padden, who acted as a kind of one-man Red Arrows exhibition through many an impoverished 1980s July in the west of Ireland.

On then to the unshowy but nonetheless majestic authority of Darragh Ó Sé and Kevin Walsh as the game hurried towards its modern incarnation. It is said that Liam McHale once collected a kick-out at midfield with one hand – and in championship at that – but no video evidence exists. Usually, high-ball midfielders are tall, long-striding fellows with an inscrutable demeanour and a steadfast belief in Gary Cooper’s maxim that words are best used sparingly.

Their styles differed: some catchers seemed to ghost in out of nowhere at the last moment to thieve a ball from the hands of their opponents. Others required the kind of runway normally associated with Heathrow airport, steaming up the centre of the field almost from their own goalline until they achieved enough momentum to launch themselves skywards.

If anything – man, woman, child or flock of migrating geese – happened to get in their way at that moment, well, that was their lookout. High-ball specialists don’t much like to talk about the art of fielding lest they spook themselves: suffice to say it’s something they do and they don’t know where it comes from, although if pressed they might mumble that their grand-aunt on their mother’s side was handy at the high jump when she was younger.

This is the kind of passionate chat that inspired the wise men of the rule book to gather around and summon this injunction which will give the high-fetcher space to once more flourish without being smothered by converging, waspish earth-bound players (perhaps or perhaps not from Tyrone) as soon as they descend with the ball. Nope, by signalling for “the mark”, the freewheeling god of the sky can navigate his landing path without the irksome prospect of half a dozen rabidly angry wing-backs waiting to mug him. He can glide back into our orbit and, with a kingly nod, force surrounding players – his subjects, now – back a respectable 13 metres (not 12, mind) so that the stadium can admire the full glory of his triumph before he coolly restarts the game with an unchallenged play of his pleasing.

In theory, it sounds beautiful. But the devil is in the detail and as usual, there are all kinds of sub-clauses and provisos that would fry the noggin of an actuary, let alone an already put-upon intercounty referee. And in the wilder moments of the championship – a tar melter in Clones, say, or a deluge in Castlebar – well, it can only lead to one thing. What if the player completes his catch but can’t signal that he wants the mark?

Or how about this peach of an interpretation: “If he [the player who has made the spectacular catch] does not obviously stop then it should be taken he is playing on.” Mmmh. Those words “obviously” and “should be taken” are so laden with potential for defensive mayhem that they might well be luring Ryan “Ricey” McMenamin out of intercounty retirement right now.

And it’s not an entirely a fetcher’s dream either: if he delays on the ball for five seconds – “acting the douche-bag”, the Gaelic Games correspondent assures me, is the technical term in the clár – then a free goes the other way! Think about that. One second you’re this Burt Lancaster-type god who makes lesser men bow down before you. Five seconds later, the entire world is on your back for giving the ball away. In a way, it sounds a lot like championship.

Welcome then, the Mark.

You should be fun.

1 Sam Bennett struggles as Roglic wins Stage 10 of Vuelta
2 All-Ireland Senior Football Championships: a county-by-county guide
3 Bennett punished for pushing his luck to fall foul of VAR’s narrow line
4 Jackie Tyrrell: We’ve got the championship back. But where’s the physicality?
5 History suggests England should keep their part of the bargain
Real news has value SUBSCRIBE
Here is your handy guide to sport on television this week