McCoy can strike for McManus 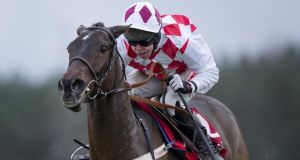 It takes a lot to switch the spotlight from Tony McCoy just now but Flemenstar’s return to action at Navan tomorrow might manage it.

On the back of owner Stephen Curran’s controversial decision to move his triple-Grade One winner from the colourful Peter Casey to Tony Martin, and the horse’s wind operation during the summer, there will be huge interest in how Flemenstar performs when he defends his Boylesports Fortria Chase crown.

In form terms the eight-year-old who lit up Ireland’s pre-Christmas steeplechase scene last season, during which he looked a potential Gold Cup horse, should have little difficulty beating only three opponents. Flemenstar has over a stone in hand of the trio.

But this will be an important first-step for Martin to get to know a horse whose talent is such that a series of Grade One placed efforts last season behind Tidal Bay, Sir Des Champs and Sprinter Sacre were widely characterised as an anti-climax. Any Gold Cup ambitions that might remain for Flemenstar will hardly be enhanced by winning tomorrow’s two-mile heat but anything other than a victory will be major disappointment, and for more than just the immediate connections.

McCoy at Navan
McCoy is travelling to Meath to ride three for JP McManus, including Captain Cee Bee in the Grade Two Lismullen Hurdle, a race in which Michael O’Leary’s Gigginstown team, currently at the centre of a Turf Club investigation into the frequency of late non-runners, own half the six-strong field.

Rule The World put in a very satisfactory reappearance at Naas recently and the World Hurdle candidate should be able to further build on that here following his fractured pelvis injury last April.

Very Wood is the Gigginstown hope in the Grade Three For Auction Novice Hurdle and McManus pitches in his Listowel winner Minella Foru in what, despite the presence of King Of The Picts, shapes as a likely battle of Irish jump racing’s superpower owners.

Minella Foru boasted a big reputation from the point-to-point field which he did nothing to tarnish in September but if ground conditions turn very testing Very Wood’s stamina could sway the verdict.

Potentially intriguing
McCoy’s third mount is potentially intriguing. Having effortlessly won a maiden hurdle at Gowran last March for Enda Bolger, Marlbrook is now with Colm Murphy and no time is being wasted sending a horse from the family of Corbiere over fences.

Pitched against Marlbrook in the Beginners Chase is the former Cesarewitch winner Minsk whose best hurdles form is in a different league. But fences might be a different story.

Ruby Walsh is on duty at Limerick tomorrow for three rides, the best of which might be Un Beau Roman in the conditions hurdle if the ground doesn’t get too testing. Walsh is also on Themoonandsixpence in the veterans handicap chase and although sharing topweight with Bob Lingo, this looks a decent opportunity for the versatile Caim Hill who ran a fine race at Galway recently on testing conditions.