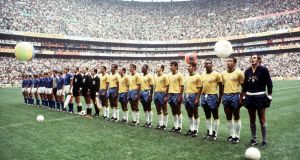 Fintan died sadly young in a car crash but when I think of him I instinctively remember the 1970 World Cup final and the two of us as kids, definitively on the wrong side of history. Photograph: Popperfoto/Getty Images)

When required to reduce his 2014 concerts at Croke Park from five to three, Garth Brooks declined saying – somewhat controversially, you’d imagine, back at home – that it would be like choosing between his children. I’m not going to claim that the same thought crossed my mind when asked for a favourite sports memory but I couldn’t do it, either.

So much happens in a lifetime and sport conveniently lays itself out in neatly tagged years and seasons. Sorting out memories – never mind ranking them – is hard enough with all the digression and tumbling down rabbit-holes.

My father and grandfather were primarily interested in rugby and so most early memories reflect that.

Watching televised internationals on distant afternoons at home remains with me as most vividly does being brought by the pair of them to Twickenham in 1972. They sorted themselves out with stand tickets and sent the 11-year old me to stand on the terrace and meet up afterwards.

It meant that I was directly above where Kevin Flynn scored the winning try in what the locals grumbled was the second hour of injury-time.

Coming after a rare win in Paris, it set Ireland up for a Grand Slam but the expectant delirium was cut short when, in a show of Celtic solidarity, Scotland and Wales refused to travel because of the Troubles and I’ve never forgotten them for it.

Symmetry strikes. Fifty years ago marks my first strong recall of a sporting year. Martin Flanagan, the great Australian sports reporter, wrote a book called 1970 and Other Stories. The main piece is about the eponymous year’s grand final and how Carlton overcame a 44-point deficit against Collingwood and it’s brilliant.

My more prosaic account of 1970 would include Ireland beating Wales in the rugby championship, my first FA Cup final, World Cup and All-Irelands. Cork beat Wexford and Kerry beat Meath in the first 80-minute finals.

I can still see (so can anyone, by the way, on YouTube) the DJ Crowley goal, which sealed it for Kerry. Last year, in a 50-year retrospective on his own career, John O’Keeffe pointed out that he had given DJ the hand-pass: “It was a left-handed fisted pass. I was impressed by myself!”

It was strange thinking back to myself as a 10-year-old watching this in black-and-white television, unknowing – in reality, unknowable – that I would end up 49 years later discussing it with one of the protagonists, who I knew well by that stage as a distinguished contributor to the newspaper’s football coverage.

That summer I had stayed up late to watch matches in the World Cup from Mexico. Enthralled by Italy’s uncharacteristic, high-scoring defeat of West Germany in the semi-final, I turned up at a 10th birthday party on the day of the final.

One of my friends and I were possibly the only people in the world outside of southern Europe not cheering for Brazil and we jumped around like mad goats when Italy equalised. But they were clunky and dissonant compared to the samba beat and well beaten in the end.

Fintan died sadly young in a car crash but when I think of him I instinctively remember the 1970 World Cup final and the two of us as kids, definitively on the wrong side of history.

The Dubs rose in 1974, a development I – having no knowledge of the GAA older than four years – regarded as miraculous. We’d a teacher in school, Paul Kelly, whose top-level refereeing career stalled because Dublin wouldn’t stop reaching All-Irelands that decade.

Fast developing some perspective, I got a huge thrill from Galway beating Cork in hurling semi-finals in 1975 and ’79 even if the follow-up was forgettable both years.

It was so packed, we had to light each other’s cigarettes and only our shoulders got wet when it bucketed down

As a college student in my weekend job minding the Shelbourne Hotel back office, I heard on the radio Joe Connolly’s speech and Joe McDonagh singing The West’s Awake and knew that it would end up being eternally revisited.

During the 1982 World Cup I saw most of the matches in Foley’s on Merrion Row thanks to a brilliant summer job doing tours of Trinity between 10 and four which, despite the hours, generated piles of cash which I ploughed into Foley’s in Harp-linked bonds.

The stand-out memory was the Italy-Brazil quarter-final group match, for me the balancing payment from 1970 and Paolo Rossi’s redemption song – a hat-trick in the 3-2 victory just months after finishing a two-year ban arising from a bribery scandal.

The first time I didn’t pay into an All-Ireland was the 1983 football final between Dublin and Galway when pressure on the gates led to them being opened up on the Canal End, on Garda instructions.

It was so packed, we had to light each other’s cigarettes and only our shoulders got wet when it bucketed down. A year on and I saw Bohs beat Rangers in the Uefa Cup and knew the environs well enough to be back in the Commodore on Parnell Street with a pint almost before the first stone had been thrown in the subsequent riot in Phibsboro.

Like everyone else, I gaped in wonder at the Charlton years, making it to Cagliari for the country’s first World Cup match in 1990 and I struggle with the fact that it’s 30 years ago

One fight I did catch was the International Rules a couple of months later in Croke Park, little realising that it was the start of a relationship with the peculiar, but at times exhilarating, hybrid game which is ongoing (just about) more than half a lifetime later.

Faithfully attending all the subsequent Dubs’ matches in the Eighties brought an occasional pay-off like beating Kerry in 1987 NFL final but no windfalls.

I was also in Clones with my friend Eugene McCague for Monaghan’s 1985 Ulster title and weeks later when they nearly beat Kerry in the All-Ireland semi-final, drawing with a late Eamonn McEneaney free. An oul’ fella from Kerry said to Eugene, “D’you know – I’m glad he got it. Ye deserve another day out”.

Like everyone else, I gaped in wonder at the Charlton years, making it to Cagliari for the country’s first World Cup match in 1990 and I struggle with the fact that it’s 30 years ago. Funnily, I find the tournaments with Ireland present excruciatingly tense, compared to the mellow enjoyment of not having that much skin in the game.

I’ve gone easy on the time during which I’ve been involved from a different – at once more involved but also more distant – perspective but have still been thunderstruck by great events: Clare and Wexford franked hurling’s second golden age and Kilkenny followed by Dublin became the most dominant teams ever.

There was also the rise of Ulster from 1991, when I stayed in James McCartan’s house after the Down All-Ireland press night as I had met him and his dad, Jim, on the International Rules tour of 1990.

It would become my favourite anecdote of how things have changed for reporters, who are now all but warned that they will be shot if seen near players’ homes before All-Irelands.

Personally, at the end of the International Rules series in 2017, I messaged my good wishes from Perth Airport to the Cuala women before their All-Ireland junior semi-final in Monaghan against Corduff.

I paid for in-flight connectivity to follow the progress of my youngest, an ‘all-action’ corner back, and her team, as they narrowly lost their chance to be in an All-Ireland final.