Farrell set to stick with experience; Ken Early on contrasts between Haaland and Mbappe 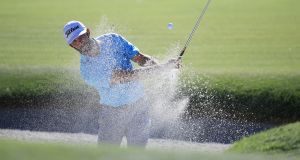 Max Homa plays a shot from a bunker on the 17th hole during the final round of The Genesis Invitational at Riviera Country Club. Photo: Sean M. Haffey/Getty Images

To rugby first this morning and Andy Farrell looks set to stick with the tried and trusted for Saturday’s Six Nations clash with Italy with the need for a win trumping the chance to try out some unproven players. A win is definitely needed in Rome after what’s been a tough time for Irish rugby in this year’s Six Nations and this morning Brian O’Connor writes in his Tipping Point column that the current struggles are another example of how new and fresh is not always better than the old regime. “There’s nothing original in pointing out how newness is no virtue and oldness is no vice. Yet almost invariably the reaction in sport is to ditch the wily old bird in the hand for the promise of what might be in the bush.” On Saturday, Connacht put together an impressive four-try performance to see off Cardiff in the Pro14 but afterwards head coach Andy Friend said his team still have much to work on in getting to their best.

On to soccer and this morning Ken Early writes that Kylian Mbappe and Erling Haaland are set to dominate football for years to come but they represent a fascinating contrast in playing styles. Whereas Mbappe encapsulates style, pace and flair, Haaland is more brute strength and directness. “Mbappe is better than Haaland at almost everything: touch, passing, dribbling, involvement in the game. At this moment Haaland has a tiny edge in that one crucial area of lashing the ball into the net,” he writes. Meanwhile, in the Premier League, Manchester United got back on track with a 3-1 win at home to Newcastle which moved them back into second place while Steve Bruce’s side now sit just three points above the relegation zone but the manager remains confident they will stay up. Earlier in the day Manchester City made it 18 wins in a row to go 10 points clear thanks to a Raheem Sterling goal at Arsenal while Tottenham’s poor form continued with a 2-1 loss to Champions League-chasing West Ham. However, afterwards José Mourinho insisted that his coaching methods are still the best in the world despite the defeat meaning that Mourinho has earned just 81 points from his first 50 games in charge of Tottenham, his lowest total at any stage of his managerial career.

6 Addicted to Diet Coke: My battle to beat a 27-year, seven-a-day habit

15 The Path Ahead: Full facts from Nphet paint stark picture

16 Hotel isolation for 20 states excludes US, UK where cases ‘rampant’

21 Irish biotech Amarin gears up for drug launch in Europe

22 When exactly will my children go back to school?

24 Lack of trust causing women to put their lives at risk, CervicalCheck warns

27 Enda McDonagh obituary: A theologian scholar with a towering intellect

29 ‘An accident is not a crime’: Tiger Woods will not face charges in crash

31 Tennis’ uncomfortable truth: Djokovic might be greatest of them all

33 North’s status under Belfast Agreement is an inconvenient truth

35 Q&A: Why new data on vaccine effectiveness and intervals is relevant to Ireland

37 ‘The type of pornography that my partner watches upsets me’

39 ‘Running away from shadows’: The life path I nearly chose – before Australia beckoned