Minor failings and a football breakthrough: the making of Gearóid Hegarty 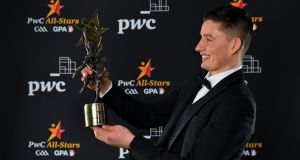 The making of the 2020 Hurler of the Year was a football match. A club football match at that, back when Gearóid Hegarty was a raw 20-year-old full forward.

His club, St Patrick’s, were beaten in the 2014 Limerick county final, their first in 47 years. Had you pulled him aside that day and told him there were two All-Irelands and a Hurler of the Year award in his future, he’d have looked at you with pity. But the road here started there and then.

“That loss knocked me for six. That took me a bit of time to recover. It was kind of a bit of a eureka moment really because I always remember thinking there was so much more potential in that team.

“And then I got a break. John Brudair was our club manager and he got the Limerick football job. He brought me in and that completely opened my eyes in terms of what it takes just to be on a senior county panel. Training in the gym twice a week and on the field three times a week. To really look after your sleep and nutrition, so on and so forth. So, yeah that was a huge learning curve for me.”

Few have learned better. Hegarty was the leading candidate for the gong before the All-Ireland final and then he went and drained all mystery from the situation with seven points from play. He stands out now as the prototype Limerick hurler – physically dominant, deadly accurate, relentless. As he sat with his family on Saturday night to enjoy the award, they reflected on how far he had come.

“We were kind of discussing the last number of years and I suppose not a lot of people would know that as a minor I was on the panel for two years and I never really got a look in. In my first year as a minor when I was only under 17, I was thinking that was a learning curve and I was hoping that the year after I’d get on the starting team and I never did. I think I regressed the year of my full minor and I didn’t even make a subs bench.

“Looking back on it now, those were the best things that ever happened to me; those experiences. They make you, and I just wasn’t good enough as a minor. There’s no excuses my end – I just wasn’t good enough and then over the years you get to learn. You’ve just got to learn from your failures and that’s something as a teacher that I try and teach my kids. Failure is not fatal. It’s just feedback to get it right in the future.”

In Limerick, they know failure all too well. Hegarty’s father Ger was on the teams in the 1990s that lost back-to-back All-Ireland finals. Gearóid was born just a few weeks before the 1994 defeat to Offaly. Times like this felt close at hand and still so incredibly far away in those days.

“It just shows the inches, the margins at the top of the sport. You need an element of luck to go your way and I suppose they just didn’t get it done on the day. I was actually mentioned in the commentary that day. I was only about 30 days old, my mother was obviously at the game. I was staying with my mother’s parents.”

Nothing of any concern found in inspection of Gordon Elliott’s stables 19:16
Reanne Evans and Ng On-yee offered professional tour cards 18:36
Leinster and Munster homing in on French opposition in Champions Cup draw 18:11
New Champions League format could see 36 teams in group stages 19:40
Sam Bennett has to settle for fifth in second stage of Paris-Nice 16:40
Crossword Get access to over 6,000 interactive crosswords