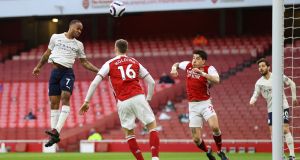 In the end all it took was 90 seconds. Manchester City extended their winning run in the Premier League to 13 matches, and their lead at the top to 10 points with a win at the Emirates that looked, after Raheem Sterling’s early goal, like it might become a spree, but which ended up an angsty, slow-burn affair against a resilient Arsenal team.

Losing by the single goal to Manchester City: this counts as progress now, and Arsenal were impressive after a terrible, somnolent start left them chasing the game. Mikel Arteta has worked hard to instil a greater solidity. It was apparent here, although the home team also struggled to create clear openings, with Pierre Emerick-Aubameyang a fretful figure at the edge of things.

For City this felt like just another step towards the tape, another clean sheet, and another fine away win with a sense of strength in reserve.

The Emirates was a balmy, soft place at kick-off, a powder-blue sky peeping in over the cantilevered steel lip of that vast empty main stand. City came here on a run of 17 straight wins, most of them devoid of friction, a run of easy kills. This is a team in one of those imperial phases where even the warm-ups, the pre-match hugs, have an air of command.

Here Pep Guardiola reunited the João Cancelo-John Stones-Rúben Dias-Oleksandr Zinchenko backline, and continued to mine the strengths of that three-man false-nine-style frontline, with Kevin De Bruyne starting for the first time since January 20th. In that time City had won eight in a row, scored 24 goals and opened up a 10-point lead in the league. Kev, long time no see. Of course we’ve missed you.

In reality it was De Bruyne’s supreme turn as a false nine at Stamford Bridge in November that helped announce this new-model City team. Here, he started in the middle again as a deep attacking midfielder, with Riyad Mahrez to the right and Raheem Sterling to the left.

From the kick off Arsenal’s centre-backs looked utterly thrown, deprived of any bodies to mark in the centre. It was a combination of City’s attacking trio that brought an expertly-worked opening goal, albeit an opening goal that met no resistance, no sense of any human obstacles.

City’s players simply stroked the ball around between themselves for the opening 60 seconds seconds. Eventually De Bruyne rolled a pass out to Mahrez. His deep cross found Sterling - who is just under 5ft 7in tall - soaring unmarked to plant a header past Bernd Leno.

Inside the Emirates there was a shout and a fond white-shirted team hug, but no real sense of surprise. And so on we went. Mahrez kept on Charleston-ing through on the right. With seven minutes gone the score could have been 4-0. Shots were saved or deflected wide. Sterling almost walked another one in.

In those early moments Arsenal appeared to be intent on “playing dead” in the face of a superior predator, refusing to engage with the game at all, like a splayed hedgehog who has, on this occasion, forgotten to curl himself up into a ball.

“Communication,” Mikel Arteta yelled repeatedly from the touchline. And steadily Arsenal did claw their way back into the game. Progress came down the left. Bukayo Saka found some space, took the ball from Kieran Tierney and saw his shot hit Aubameyang in the six yard box.

Otherwise City continued to dominate both possession and territory. With half an hour gone a kind of uneasy equilibrium had been reached, Bernardo Silva and De Bruyne gliding around between the lines, Arsenal defending in a deep red block.

Saka led Arsenal’s brighter moments. Five minutes before the break Nicolas Pépé scuffed a shot into the side netting from an unpromising angle on the right. And by half time there was a vague sense of City letting their levels drop, dozing slightly as Granit Xhaka saw more of the ball in midfield.

City came out early for the second half, and began at a sprint. De Bruyne might have made it 2-0 with a lovely inventive chip from a fine angle. Sterling carried the ball deep into the Arsenal box, but was skilfully covered by Rob Holding, who was having a good game after dozing off for the opening goal.

Arsenal recovered their composure and found some traction. Silva was booked for a hack at Pépé. Martin Ødegaard began to find those half-spaces in which he likes to lurk. For a while Guardiola stalked his touchline, fumbling anxiously at the strings of his baggy grey cotton hoodie.

But City always seemed to have another gear. The Poacher, Ilkay Gündogan, found some space for a shot that Leno palmed behind. And with an hour gone this had become an absorbing, finely-poised game of possession and swift breaks.

Gabriel Jesus came on for a tired-looking De Bruyne with 27 minutes to play. But Arsenal refused to wilt, with Xhaka impressive in midfield and the left flank still their best route to goal.

With 10 minutes to go Cancelo combined brilliantly with Jesus, glided inside Pablo Marí like a man in a tuxedo shimmying his way across an oiled parquet floor, then poked a shot millimetres wide.

Arsenal had glimpses of the City goal in those final minutes, but the Stones-Dias axis remains a formidable obstacle. Both centre-halves attacked the ball impressively, and pushed high when City attacked. The sky blue and white machine rolls on. - Guardian