Andy Friend confident Connacht are getting to closer their best 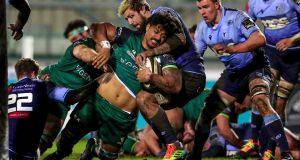 Connacht’s Abraham Papali’i scores a try despite the efforts of Joshn Turnbull of Cardiff Blues during their Pro14 clash. Photo: Ryan Byrne/Inpho

It was far from flawless, but Connacht produced a timely four-try winning performance against the Cardiff Blues to maintain their push in this season’s Guinness Pro14.

Two tries in rapid succession at the end of each half was the perfect antidote to a run of four successive home defeats, and with four Pro14 fixtures remaining, coach And Friend believes the best performance is yet to come.

“We’ve seen glimpses,” he said of Connacht’s win over Edinburgh at Murrayfield earlier in the season, or patches against Racing in the European Cup, not to mention the “outstanding performance” against Leinster.

“We haven’t really been able to piece together a proper 80 minutes. Tonight was the best we have seen in the last few weeks, but there is so much more growth in us as a collective and individuals. We can get better and that is our intention.

“The biggest thing is all about clarity,” Friend said. “We work hard to make sure the players have simple messages from us as coaches, and the clarity about what they are doing, with or without the football, and then it’s about getting them to trust the systems and their skills.”

But consistency has always been Connacht’s fragility and Friend will need Saturday’s form to continue. With four games remaining, it will be a tight for the three Champions Cup places. Two of those are away games - against Munster, who still maintain their stranglehold on Conference B, and Scarlets, who have now leapfrogged Cardiff to close the gap on Connacht - who still have a game in hand - to seven points.

Man of the match Alex Wootton was instrumental in Connacht’s bonus point win - scoring two tries within seven minutes at the end of the first half, taking his tally in the Pro14 to nine.

“Brilliant for us,” said Friend of Wootton. “He has a way of finding the try line. I love his speed, the way he reads the game, and the confidence he has out there.”

Wootton ensured the home side held a 20-10 half-time lead. And when Cardiff reduced that deficit to just three with 20 minutes remaining, Connacht’s pack took over, with captain Jarrad Butler and Abraham Papali’i taking charge of the bonus point.

“We said coming into this run of five all we can do is win, and if we win with bonus points, we keep the pressure on Munster. We are not getting ahead of ourselves. We still have to go to Treviso, so we have six days to recover, and produce another good performance, but we are getting closer.”

Cardiff’s early energy and physicality ensured they dominated the opening 25 minutes, while also denying the home side possession through a well contested lineout. Eventually they were rewarded with a 12th minute try from prop Rhys Carre, with outhalf Jason Tovey adding the extras.

Although Connacht outhalf Jack Carty closed the gap with two successive penalties, the sharper visitors edged back in front with a 26th minute penalty.

It was then Connacht who produced two scintillating tries - the first from an initial burst from Paul Boyle, and when Caolan Blade switched direction to the left wing, Healy fed Wootton who had no problem evading hooker Liam Belcher to race up the wing for a superb try, with Carty adding the extras.

Minutes later Wootton bagged his second. Lock Ultan Dillane made an important surge, but it was Carty’s swift tip-on pass to Wootton that did the damage as the right wing secured his eighth of this season’s campaign for a 10-point lead at the break.

The visitors again created their chances. Although outhalf Jason Tovey missed a penalty, a succession of successful kicks provided the platform for replacement prop Corey Domacheski to touch down, with replacement Dan Fish adding the conversion.

Just three points ahead, Connacht’s response was swift. Eoghan Masterson set up a driving maul from a penalty to touch with Butler extending the lead to 25-17. And with three minutes to go, replacement Papali’i barged over for the fourth try to seal what Connacht hope is a pivotal victory.

3 Chelsea win at Liverpool to move into top four