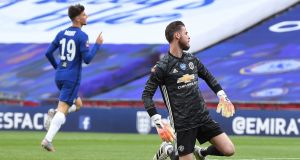 Chelsea’s Mason Mount celebrates after his shot past David de Gea helped his side on their way to the FA Cup final. Photo: Andy Rain/NMC/Pool

A return to normality has been talked about a lot over the past few months and, while there is not much normal about Kilmacud Crokes and Ballyboden playing in front of an empty stadium, it’s better than the two teams not playing at all. The Dublin Senior Hurling Championship got back underway yesterday with an easy win for Crokes in Parnell Park on a day that felt very different for a big club championship game. In his Tipping Point column this morning, Malachy Clerkin writes about the return to reporting on a match from the ground and how the familiar sights and sounds are even more welcome than usual.

In soccer, it was an empty Wembley that saw Chelsea dismantle Manchester United to book their place in the FA Cup final after another poor performance from David de Gea. Ole Gunnar Solskjaer made a number of changes for the match and they backfired but it was de Gea’s performance that will be focused on after goals from Olivier Giroud, Mason Mount and an own goal from Harry Maguire sealed United’s fate. After the match, Frank Lampard says he wants his players to focus on the “three domestic finals” they have coming up to claim third place and win the FA Cup. There was some solace yesterday for United in that their chances of finishing in the top four now lie in their own hands with two matches to go after Tottenham beat Leicester 3-0.

1 ‘It was pitch black’ - Rescued teenager describes night afloat with her cousin in Galway Bay
2 Inside Meghan and Harry’s broken relationship with the royal family
3 Inside the O’Brien Fine Foods factory in lockdown Kildare
4 A million trees, including 400,000 oaks, to be destroyed this week
5 Anne Doyle: ‘Depression? I know what it is, and it’s a b*tch’
6 Schools urged not to demand clean uniforms each day
7 David McWilliams: It is time for a major property reset
8 Over 400 complaints from migrant workers at meat plants lodged with WRC
9 Aaron Brady, the man who said with pride he was a cop killer
10 Garda killer Aaron Brady will be almost 60 by time he leaves prison
11 Irish team wins international competition with dementia app
12 36 hours on Northern Ireland’s Causeway Coast: ‘Everyone is having a wild time’
13 ‘I’m going to ask you something,’ Sorcha goes, ‘Have you two been sleeping together?’
14 Jennifer O’Connell: Why is Trump afraid of Kamala Harris?
15 Britain fails yet again to take Ireland into account
16 The hatred of HP Lovecraft: Racist, anti-Irish bigot and horror master
17 Carrick-on-Shannon native left reeling by plan to raze home
18 Inside Meghan and Harry’s new $14.7m nine-bed, 16-bath California home
19 Biden-Harris: A force to be reckoned with
20 Shane Kenny convinced Achill water contamination triggered medical relapse
21 Mike Pence fretting as Kamala Harris shakes up Republicans
22 Conor Pope’s staycation diary: ‘It’s like I’m staring at a Polaroid of my childhood holidays’
23 Nine tenants evicted from north Dublin property by men in masks and dark clothing
24 Time to raise taxes not cut them
25 GAA in Ballymun: The whole team were called ‘scumbags’ by grown adults
26 Coronavirus: 67 additional cases but no new deaths reported in the State
27 Guardiola says tournament format favouring lesser teams
28 Worst sporting moment: White knuckle ride on a hate-filled night at Windsor
29 Politicians opt for staycations where peace may be hard to come by
30 Lebanese roots keep things in perspective for Michael Cheika
31 Landlords’ group concerned with manner of Dublin eviction
32 Bayern hit Barcelona for eight on madcap night in Lisbon
33 ‘It was like somebody put a furnace in my core’: Michelle Obama on menopause
34 Maria Steen: Only a sick society can see children as a burden
35 Morrissey’s Dublin-born mother, Elizabeth Anne Dwyer, dies after illness
36 Homeless man spoke about Covid-19 challenges month before death
37 The sad, secret life of Whitney Houston
38 Two Irishmen held in UK on suspicion of planning to carry out kidnap
39 Where are they now? The mixed fortunes of gang linked to Det Garda Donohoe killing
40 Relieved mother of rescued women says paddleboards will never ‘darken doors’ again
Real news has value SUBSCRIBE