Jim McGuinness’s men should get their season back on track 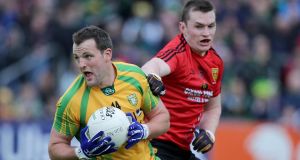 The likes of Donegal’s Michael Murphy will have to come up with some scores if his side are to progress. Photograph: Morgan Treacy/Inpho

”Every man is mad to put it right,” says Donegal captain Michael Murphy, although now is the time for calmness, not madness.

The very prospect of both the reigning All-Ireland football and hurling champions being gone before the end of July has certainly caught a lot of people by surprise, although in reality this is unlikely to be the end of Donegal, not yet anyway.

That’s not saying it’s going to be easy. First, Donegal have the defy the dreaded curse of the six-day turnaround, which has seen just Dublin (in 2001) and Down (last year) manage to win a fourth-round qualifier six days after losing their provincial final.

Secondly Donegal have prove to themselves that last Sunday’s Ulster final defeat to Monaghan was just a minor seasonal blip and not a terminal seasonal decline, and that’s not going to be easy, either. Thirdly they have to do it all without Mark McHugh, one of their most influential players, who is ruled out with concussion.

These were just some of the matters put to Murphy during the week at a pre-arranged press conference at his home club of Glenswilly. He didn’t shy away from the big bold question: what happened to Donegal last Sunday?

“We trained normal, prepared well, tactically, physically, mentally we were in a good spot, but we didn’t form,” he said, a few times over, as if to underline it was just as simple as that. And maybe it was.

Joe Brolly’s suggestion on The Sunday Game that Donegal may have trained too hard going into the Monaghan game, which might explain their lethargy and distinct sluggishness, seems a bit simple too, but what is certain is that Donegal aren’t as bad as they were last Sunday.

Darragh Ó Sé more likely nailed it in his column in this newspaper, when suggesting they’ll have absolutely no problem picking themselves up for this, that they won’t be just mad to put it right but pissed off at themselves for getting it so wrong against Monaghan, and that ultimately they achieved too much last year just to let this year fizzle out.

Particularly galling
Nevertheless, it’s entirely new territory for manager Jim McGuinness, who although accepting the Monaghan defeat with great humility, must be wondering how his team were effectively beaten at their own game, or at least why none of his forwards scored from play. And of course not scoring until the 32nd minute, with a Colm McFadden free, must still be particularly galling.

Maybe some of the warning signs were there against Down in the semi-final, when Donegal never once threatened a goal, but the first thing McGuinness will want to see more of here is scores, starting with the likes of Murphy. The big fear all along is that Donegal would struggle if they fell behind and were forced to dig deep into the well, which for any defending All-Ireland champions is always going to be running a little dry.

What Laois certainly won’t fear is the opportunity to take out the All-Ireland champions – knowing full well how fortunate they are to even have that chance. Manager Justin McNulty actually admitted he went along to Clones last Sunday to take notes on Monaghan, fully expecting to be playing them.

Wexford must also be still wondering why they aren’t in Laois’ position: but after hitting 16 wides, they simply let Laois off the hook. The feeling now that McNulty’s men have nothing to lose. Donie Kingston is recalled, having lost out to Evan O’Carroll last week, and while O’Carroll is retained, David Conway is the player to lose out.

Laois also boast an excellent qualifier record under McNulty, looking for an eighth successive win in two years, but Donegal should restore some calmness and emerge from the madness.