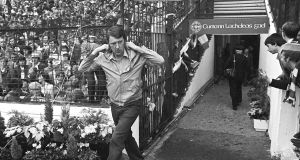 Offaly manager Eugene McGee makes his way onto the Croke Park pitch before the start of the 1982 All-Ireland SFC Final against Kerry. Photograph: Ray McManus/Sportsfile

The late Eugene McGee (78) was a man of many achievements and talents but the past 37 years of his life were dominated in the public mind by what happened in Croke Park on a September Sunday in 1982.

With two minutes to go in the All-Ireland Final senior football final that year Offaly were about to lose to Kerry, then leading by two points and on track to win their fifth All-Ireland title in a row.

It had never been done before and seemed a done deal.

Offaly manager Eugene McGee would have been forgiven had he reached for a quote worthy of the situation “ . . . they think it’s all over . . . ”.

Instead he brought on Séamus Darby who, in his only kick of the game, scored the most talked about and celebrated (outside of Kerry) goal ever in Gaelic football. Kerry lost.

Offaly have not won an All-Ireland senior football title since, underlining that most famous victory of Eugene McGee and his team.

A man described as “blunt and honest” – this extended to that most underrated virtue, the inability to suffer fools gladly, not least in his journalism.

In a 2015 interview he explained. “GAA writers over the years were famous for not offending anybody, it was always an arse-licking job; you were under the thumb of the county board secretary or whoever was in power, and that’s probably what attracted outsiders to me at the start,” he said.

It was also what probably attracted readers to his columns. In that same 2015 interview with Paul Kimmage he recalled how an opinion columnist “was once described to me by an American author as follows: ‘He is the guy who waits till the battle is over, comes down from the hills and shoots the survivors.’ True to an extent, but perhaps just a teeny bit over the top.” A little, maybe.

As to his image, he noted how “a lot of people say I am gruff, dogmatic and dour. I wouldn’t completely agree with that. Take [Kenny] Dalglish or [Kevin] Heffernan – they rarely appear cheerful in front of the cameras either. You cannot command authority if you are just one of the boys.”

In his media career he worked for the Sunday Press,the Irish Press, the Sunday Tribune, the Evening Herald and the Longford News until becoming managing director at the Longford Leader. It was later sold to Scottish Radio Holdings. He continued to write a weekly column for the Irish Independent.

His first book ‘Classic Football Matches’ was published in 1993 and in 1996 his ‘St Mel’s of Longford: A History 1865-1990’, the story of the diocesan college for Ardagh and Clonmacnoise. His ‘The GAA in My Time’ was launched in 2014 by none other than Mick O’Dwyer, the Kerry manager whose five-in-a -row ambitions McGee had so ruthlessly thwarted in 1982.

But it is as one of the most successful coaches and managers in Gaelic football that he is best known, starting with the UCD Club which he coached to six Sigerson Cup wins as well as two Dublin championships and two All-Ireland Club titles in 1974/75.

With Offaly he won three Leinster titles and that famous 1982 All-Ireland final. He managed Cavan for a time and the Ireland team on two occasions for the compromise rules International Series against Australia, winning the 1990 series in Australia. In 2013 he chaired the GAA’s Football Review Committee which introduced the black card designed to stop cynical fouling,

From the parish of Colmcille about 15 miles from Longford town, he was born in 1941 the second youngest of seven children of Owen and Catherine McGee. His father was a national school teacher.

At UCD Eugene began by studying Agricultural Science before changing to Arts, including English. He wrote for the UCD student paper where his fist assignment was a rugby match between UCD and TCD. He also began writing for the then GAA newspaper Gaelic Weekly. He taught for a brief spell in Dublin before beginning work full-time with Gaelic Weekly and then with the Irish Press.

In a tribute Minister for Transport, Tourism and Sport Shane Ross said McGee had “an innovative approach to GAA management and was an honourable and well respected journalist.”

GAA president John Horan said “Eugene McGee was a giant of Gaelic football.” He was “a straight-talking man of great integrity” whose “passion for the game always shone through”.

Offaly GAA said: “Eugene’s departure from this life has left all who were fortunate enough to have known him, with heavy hearts, but also much richer for having had the benefit of his enormous wisdom. To his wife Marian, son Conor, daughter Linda, extended family, his colleagues from 1982 and all who had the pleasure of knowing him goes our heartfelt sympathy.”