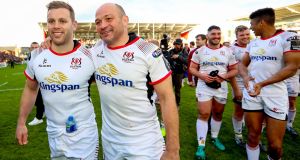 Darren Cave with Rory Best after both playing their final home game in Ulster’s Pro14 quarter-final win over Connacht at at Kingspan Stadium. Photograph: Tommy Dickson/Inpho

As Connacht know as well as anyone from eviscerating Leinster by a record margin a year ago in John Muldoon’s final game, bidding a playing goodbye to an iconic, long-serving captain on home soil can be a powerful spur.

Ulster were overcooked in Johann Muller’s home farewell in 2014 but, at a vibrant Kingspan Stadium on Saturday, their high levels of emotional energy were perfectly focused and, odd moment of edginess aside, sustained for the 80 minutes in Rory Best’s final home game.

Ulster drew on this well of goodwill.

Best’s day was made memorable by Ulster winning and having his wife Jodie and three kids, Ben, Richie and Penny, in attendance. However, he revealed that his eldest, Ben, had pointed out that he made his debut in the same year that Michael Lowry was born, which didn’t do much for his piece of mind on returning from the ankle injury he sustained against Leinster five weeks ago.

As he nears hanging them up, Best remains as tough as old boots, and as he took in yet another ovation from the crowd after what he described as a gutsy performance to be proud of, he admitted to having “mixed emotions”.

“I’m very proud of what I’ve been part of in my time with Ulster – first wins in England, first wins in France, you name it, it’s all pretty much there apart from the trophy. I’ve tried not to speak about it too much.

“We didn’t have a great performance at Glasgow about a month ago, so there’s work to do and it’s a tough game, but there’s also a bit of unfinished business from four years ago where we could have and should have won a semi-final over there. I’m not saying we will win the semi-final, but I know we’re capable of doing it if we get our stuff right.

“I remember playing my first game, away to Borders in April 2007, and I remember phoning my dad after the game and saying, ‘Dad, can you believe that I can say for the rest of my life that I’m an Ulster player?’

“And while it’s not a fair comparison, because the professional game has taken over from the amateur game in terms of the number of fixtures there is, I’m not going to lie – it would be pretty satisfying to retire with a trophy and say I played for Ulster more than anyone ever in the history of the club.”

As Best admitted, Ulster needed to maintain their focus for the 80 minutes too. Jarrad Butler led Connacht’s tackle count with 26, followed by Eoin McKeon on 25 and Ultan Dillane on 20, as Connacht made it a one-point game until the 78th minute, despite the greater ballast and power Ulster had, led by Marcell Coetzee, Iain Henderson and Stuart McCloskey.

As Man of the Match choices go, Coetzee was one of the easier and more indisputable awards. Restricted to just five appearances in his first two injury-ravaged seasons, he has been like a new signing this season in playing 27 times.

Rugby, more than ever, is a contact-based sport. There’s no avoiding the collisions, and here Coetzee, who turns 28 on Wednesday, continually put Ulster on the front foot in making 24 carries for 34 hard-earned metres as well as a couple of offloads, one of which led to Kieran Treadwell’s try-scoring offload to Nick Timoney.

“One of the reasons I love rugby is because it is about the team but there is no doubt that when it comes to play-off games at this level against an opposition of the quality of Connacht, you need big plays. Big players make big plays. Marcell will win collisions that most people in rugby just can’t win.

“I thought Connacht did a good job in their defence but both him and Iain Henderson consistently won collisions there and that’s so important. He’s just loving playing his rugby, that’s the biggest thing for him.”

The flip side, for Ulster, is that Rassie Erasmus will surely recall the 28-times capped Springbok during the summer’s Rugby Championship and for the World Cup.

“Next question,” quipped McFarland, before admitting: “No, Marcell is a great player and he wants to play for his country and that’s a great thing for any player. We would always encourage that and we would always want to see our players representing their country to the best of their ability.”