Sport won’t come back in a more benign form. It can’t. It wouldn’t be sport if it did 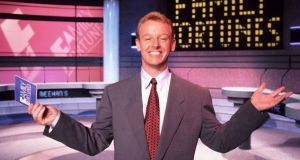 Les Dennis, host of Family Fortunes: “No matter how rank his impressions are, Les Dennis will always be welcome in this house.”

So what’s been your lockdown life-saver?

In our house, it’s Family Fortunes. Not the board game, although that’s what started it. It came at Christmas and immediately took hold as something that the Boss – then 4¾, now newly 5 – could play. Name something you read. Name something you might use to swat a fly. Name an endangered species. Hard to beat a game where you can just keep saying ‘newspaper’ and be right most of the time.

Sadly, the box only came with two packets of questions so by Day Whatever It Was of Whatever This Is, the same cards were coming out again and again. It was then that her mother hit on the blinding idea of diving down through the Sky channels to find Challenge, the station that runs old episodes of quiz shows. And sure enough, there it was, the old Les Dennis version from the 1980s, two episodes daily. Manna.

Now, it’s fair to say that some shows age better than others. On one episode during the week, a family from Birmingham were asked to name an Irish entertainer, leading to perfectly reasonably blank faces all around on their part and some of the worst accents ever committed to camera on Dennis’s.

Between his identical Jimmy Cricket/Frank Carson impressions and the fact that nobody on either team knew that Terry Wogan was Irish, it was a 32-year-old textbook example of the Brits being at it.

A life-saver all the same. The child is smitten. She obviously has no real concept of what the 1980s even means – she refers to last week as ‘the olden days’ – so these people with their mad, mad hair look like aliens to her.

And frankly, some of the questions back then were just a bit too off-the-wall, regardless of what age you are. Name an animal you might catch if you chased it. Somebody answered, “a wild horse”, which might sound like a ridiculous stab in the dark until you find out that for some reason, “tortoise” was the top answer.

Seriously, outside of a cartoon, has anyone ever chased a tortoise? Was there a spate of tortoise-chasing in 1980s Britain that didn’t quite make the news over here? Have we overlooked the great lost sport of the shires?

But beyond the occasional pass-the-dutchie interlude like that, it’s been a godsend. The idea that series-linking a harmless TV game show from 1988 could be something we do now goes on the endless list of unimaginables from this deeply odd time in our lives. Yet there’s the child each evening, shouting answers, competing, getting annoyed at losing. No matter how rank his impressions are, Les Dennis will always be welcome in this house.

There has been a tendency in the middle of all the gloom to project forward, to imagine what sort of world we’ll have when this is all over. Sport, of course, is probably more prone to this than almost any other realm of life for the simple reason that there’s basically very little else to be at, sportwise. We can’t play anything, we can’t watch anything, we can’t give out about anything. So we speculate and postulate. It’s about all that’s left.

One potentially interesting strain of that speculation deals with the idea that the enforced time-out will allow everyone to take a step back and maybe calm down a bit when it comes to sport. That being faced with something that is actually properly serious might bring about a resetting of values, a reconnection to the idea of why we all got into it in the first place.

You see sprouts of this popping up here and there, day by day. In the GAA, there’s talk of a straight knockout championship this year and the possibility that it will give a simplified template for the way forward, an ideal chance to pause and sort out the fixtures mess once and for all.

In soccer, barely an hour goes by without some big star making some big donation of some big chunk of their wages to help out.

The front page of the New York Times last Thursday carried a piece by the immortal Dan Barry, an imagined account of Opening Day in the 2020 baseball season, full of wistful nods to simpler times and sport’s capacity to ferry us through it all.

All of which is fine and dandy, for now. But none of it is the first cousin of reality. If sport is war minus the shooting, then what we have now is war minus the war. We can imagine a gentler time for sport when it all kicks off again and it won’t do anyone the slightest bit of harm. But humans are competitive animals and competition tends to burn everything else off. Imagine away, for all the good it will do.

Competition drives everything. It drives a five-year-old shouting at the TV because she can name a part of the body that will burn in the sun and kicking up a row when someone else names one ahead of her.

It drives an inter-county panel quietly but insistently pointing out that training started last October so we’ll be needing more than straight knockout championship, thanks very much. It drives the vicious blood-wars coming down the tracks over how to finish soccer seasons across the globe.

Sport won’t come back in a more benign form. It can’t. It wouldn’t be sport if it did. Just as you can’t take the eggs out of a baked cake, you can’t remove ruthless connivance or rampant self-interest or preening ego or basically any of that good bad stuff from sport. When it comes back, all the cant and nonsense about broadened perspectives will be torpedoed five minutes after the referee’s first whistle.

And if you think it won’t, you may as well go looking for some tortoise-chasing to watch. It would make about the same amount of sense.