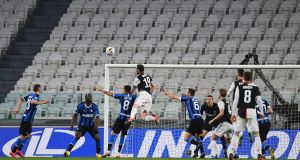 Aleksander Ceferin, the president of Uefa, has warned that the current season may never be completed if it cannot be restarted by June.

The majority of competitions in Europe have been suspended owing to the coronavirus pandemic, with English football suspended until at least April 30th, though many Premier League clubs are resigned to that suspension being extended further. Ceferin said behind-closed-doors games would have to be considered if leagues were to finish across Europe but dismissed the notion that Champions League or Europa League finals could be played without fans present.

Ceferin said this season could be “lost” if games are not resumed before June. In the event of such a scenario, the ramifications remain unknown. “If we don’t succeed in restarting, the season will probably be lost,” he told the Italian newspaper La Repubblica. “Nobody knows when the pandemic will end. There is a plan A, B and C. The three options are to start again in mid-May, in June or at the end of June. There is also the possibility of starting again at the beginning of the next [season], starting the following one later. We will see the best solution for leagues and clubs.”

Professional football is at a virtual standstill across the world and, as it stands, there are nine outstanding games to be completed by the majority of Premier League clubs, and up to 12 in the Football League. Conversations between the Football Association and professional leagues are ongoing but staging matches behind closed doors is one of several contingency measures being explored.

The Premier League’s stakeholders are set to reconvene for a conference call on Friday, with the resumption of the season, wage deferrals and player contracts likely to be key talking points. The FA has already taken the unprecedented step of expunging results for the 2019-20 season for non-league divisions below the National League, leading to a backlash from several member clubs.

“It’s hard for me to imagine all the matches behind closed doors, but we still don’t know whether we’ll resume, with or without spectators,” added Ceferin. “If there are no other alternatives, it would still be better to conclude the leagues. I can say that I’m not thinking about staging the European cup finals behind closed doors.” – Guardian

1 FAI council member raises concerns about governance of organisation
2 Gerry Thornley: Stoppage could tip balance in favour of big money teams
3 Increase in membership a plus for adapting golf clubs
4 Royal Portrush: Golf clubs ‘in real distress’ as eyes turn to 2021
5 ‘A radical departure’: Who are CVC and what are their plans for rugby?
Real news has value SUBSCRIBE
Crossword Get access to over 6,000 interactive crosswords