America at Large: Sport threads its way through so many of those felled by Covid-19 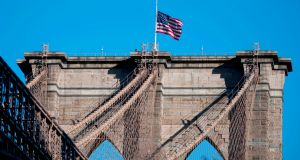 The US flag is seen at half-mast on the Brooklyn Bridge in New York on April 11th. Photograph: Johannes Eisele/AFP via Getty Images

As a child in Massachusetts in the 1940s, Mary Roman developed polio and part of her rehabilitation included riding a horse to bolster her leg power. As a septuagenarian, she held the Masters’ women’s shot put record in America and competed in the Senior Olympics. In between, Roman raised five kids, worked as a bank teller and served as town clerk in Norwalk, Connecticut. Just weeks after being spotted in a local baseball batting cage practicing her throwing technique ahead of upcoming competitions, she died from Covid-19 on March 26th. She was 83.

Dave Roberts made his name as a flamboyant point guard on the unforgiving asphalt basketball courts of 1980s New York. From Ajax Park in his native Queens up to Rucker Park in Harlem (the big leagues of the street game), he evinced the type of ball-handling, brio and showboating that brought college scouts flocking to the projects in South Jamaica. “Low Key”, as they called him, broke all sorts of records at Texas A&M. Deemed too small for the NBA, he played pro around Europe before returning to his hometown to manage a recreation centre and to coach kids. Complications from the virus killed him on March 23rd. He was 48.

The more conscientious cable news channels placed a number ticker in the top right-hand corner of the television screen once this all began. Day after day, we have watched it edge ever upwards, now past 42,000 and so much part of our visual furniture there is a tendency to see it as a meaningless statistic, like the stock market chyron trailing across the bottom. Except this is not some financial fluctuation but a real-time enumeration of the dead, an actual body count. Every moment a five inexorably gives way to a six, there is another flame extinguished, a tear in the fabric of a family, an empty chair at a dinner table.

The great American newspapers, or what is left of them, have tried their best with diligent reportage, to rectify this wrong, to commemorate each passing, devoting pages to fleshed-out obituaries in an attempt to make each death more than just a digit. To scroll through the Boston Globe or the New York Times these weeks is to run your finger along impossibly poignant thumbnail sketches of mothers, fathers, brothers, sisters, lovers, husbands, wives, sons, daughters. As is always the case in these situations, so many of these lost lives seem to have been speckled with sports, garlanded with the very games that are one more casualty of the terrible circumstance.

Fred Klein, once a minor league prospect with the Boston Red Sox, ended up owning the Carnegie Deli and having courtside season tickets for the New York Knicks at the Garden for more than half a century. Despite being born with no toes on his right foot, Tom Dempsey held the record for longest field goal in the NFL for 44 years. Timmy Brown won a pair of NFL championships with the Philadelphia Eagles before embarking on an acting career that featured roles in MASH, the movie and the television series. Freddie Lee Brown Jnr was a grocery clerk and an elder at a church in Michigan but in his youth won a basketball scholarship to Southern Methodist University. A mere sample of the sporting flavour of so many biographies now reduced to footnotes in the grim accounting of a pandemic.

On March 6th, hours after Indiana recorded its first positive coronavirus test, 2,800 shoehorned into the Lawrence Central gym to watch a pair of high school basketball playoff games, oblivious to the horrors in store. In a state where the sport enjoys the exalted status of hurling in Kilkenny, Paul Loggan (57), Roscoe Taylor (43), Charles Johnson (78), Larry Rush (67) and Jim DeSalle (70) were among the Hoosiers present that night. Within the month, all five, none of whom knew each other, were dead. Whether they contracted Covid-19 in those bleachers or elsewhere is still unknown.

Eight days later, a gaggle of former college basketballers from New York’s five boroughs gathered to celebrate the 49th birthday of David Cain, at Mom’s Cigar & Lounge Warehouse in Scarsdale. Everybody invited knew Cain, a one-time St John’s University stalwart, and each other from their teenage heyday starring on high school and AAU elite teams around the city. In the weeks since the reunion, six of them tested positive and two, Lee Green and Jonathan Duck, a one-time six foot six behemoth with Iona Gaels, were felled by it.

Some of the ballers chomping on stogies, telling tall tales that evening would have been covered in their athletic prime by Anthony J Causi, a photographer with the New York Post, a familiar landmark around the fringes of every sporting event in the city.

If his fame was founded on always capturing the crucial moment in victory or defeat, the 48-year-old was also known to gift candid prints to bystanders who wandered across his shot. When Drew Katz’s father Lewis died six years ago, a package from the snapper contained the very last photograph of the pair together at a New Jersey Nets game. After Causi’s death on Easter Sunday, Katz plastered six giant billboards on approach roads to the city with an image of the snapper that simply says, “In Loving Memory”.

Words we live by now.

1 Seán O’Brien: Anger over my parents’ break-up never left me
2 Madness or defiance? The GAA is taking a huge gamble in staging Championships
3 Plenty of positives for Farrell as Ireland hit the ground running
4 Peter O’Mahony ready to battle his way back into Ireland’s backrow
5 Ireland 50 Italy 17: Ireland player ratings
Real news has value SUBSCRIBE
Here is your handy guide to sport on television this week