Q&A: How to get around Dublin this weekend when roads close for papal visit

With 86 roads closed on Sunday, people are advised to walk and use public transport 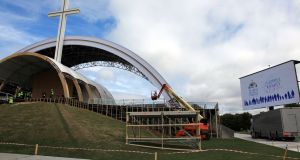 Dubliners have been strongly advised to leave the car at home this weekend and use public transport as dozens of roads are closed for the duration of the Pope’s visit.

We’ve gathered all the information you’ll need on where you can and cannot drive this weekend, along with all public transport options available for those hoping to go about their daily business.

When will roads begin to close?

Cathedral Street will close to traffic at 10am on Friday and will remain closed until 7pm on Saturday.

Which roads will be closed on Saturday and how can I avoid the crowds?

Some 52 roads will be closed around Dublin’s city centre between 6am and 7pm as Pope Francis attends events across the capital.

These road closures will stretch from Patrick Street and Dawson’s street to Cathal Brugha Street, Sean McDermott Street and King’s Street North. Dame Street, College Green and part of Nassau Street will be closed along with all streets leading onto O’Connell Street to accommodate the popemobile’s tour of the city.

The Pope, who arrives in Dublin Airport at 10.30am on Saturday, will pay a visit to Áras an Úachtaráin before travelling to Dublin Castle. Up to 100,000 people are expected to take to the streets of Dublin on Saturday to catch a glimpse of the popemobile as it drives through the city. The tour is expected to kick off at around 4.15pm and the entourage will travel down O’Connell Street, across O’Connell Bridge, up Westmoreland Street and continue up Dame Street. The motorcade will then pass Christchurch Cathedral, go down Bridge Street and across the Liffey onto Church Street to the Capuchin Centre.

The Pope will attend the Festival of Families event at Croke Park in Drumcondra with gates opening at 4pm. The concert starts at 6.30pm and will run until 8.30pm with 70,000 people expected to attend. People in the area are advised to walk or use public transport.

A letter from Dublin City Council distributed to homes around the city centre has warned that further “rolling restrictions” during the Pope’s visit on Saturday will be announced. Anyone with traffic related enquires can contact the dedicated helpline which will remain open this week and through the weekend from 9am-5pm on 01 222 8888.

What about public transport on Saturday, is it running as normal?

Dublin Bus will operate a normal Saturday service however there will be significant diversions in place. Lord Edward Street to George’s Street junction will be closed to buses between 10am and 1pm, while the North Quays, South Quays, Dame Street, O’Connell Street and Church Street will be closed to buses from 1pm to 6pm. For a full list of route changes on Saturday click here.

Irish Rail will operate a normal service on Saturday, however the car park at Connolly station will be closed to the public.

On the Green line, services will operate from Brides Glen to St Stephen’s green and Dominick to Broombridge between 10.30am and 5.30pm with no service between Dawson and Parnell. Normal service will resume at 5.30pm.

Where can I drive in the city on Sunday?

In a word, nowhere. A controlled access zone will remain in place around Dublin city until 11pm on Sunday. Some 86 roads, including all routes along the Quays both north and south of the city and any streets in the vicinity of Phoenix Park, will remain closed from 8am-11pm. Roads in Inchicore, Chapelizod, Ashtown, Castleknock, parts of Clondalkin and Drimnagh, Cabra, the Strawberry Beds, and Arbour Hill will be closed from 6am on Sunday until 11pm.

Roads leading down to the quays along the Liffey will also be closed from between 6am-9am for the duration of the day.

Parking will be suspending from 4am until midnight on Sunday on Parkgate street, the North Circular Road from North Gate to Doyle’s Corner, Benburb Street, Liffey Street West, Temple Street West and Infirmary road.

The M50 will be fully open on both days. However, the inbound lanes at J6 Blanchardstown, J7 Lucan and J9 Red Cow will be closed to all vehicles apart from buses on Sunday.

What public transport options will be available on Sunday?

Dublin Bus will operate a Sunday service however diversions will be in place through the day. There will be seven dedicated Dublin Bus transport hubs to bring people as close as possible to the Phoenix Park.

Dart and commuter services will begin operating between 6am-7.30am on Sunday. Anyone planning to travel by train on Sunday is strongly advised to book their ticket in advance and to leave extra time to travel. All intercity train routes for Cork, Kerry, Limerick, Galway, Westport and Waterford to Dublin on Sunday heading to and from the papal mass have sold out. Irish Rail will be providing extra trains for passengers travelling on the Portlaoise, Dundalk/Drogheda and Maynooth service. Maynooth trains and Dart services will operate every 10 minutes before and after the mass in Phoenix Park.

The car parks at Connolly, Heuston and Maynooth train stations will be closed on Sunday.

The Luas Red line will operate from Tallaght/Saggart to Blackhorse and from The Point to Smithfield between 7am-10pm, with no service between Blackhorse and Smithfield. The Connolly stop will be closed for most of the day.

The Green Line will operate from Brides Glen to Broombridge between 7am-11.30pm and from Broombridge passengers will need to walk. The Phibsborough stop will be closed from 3pm-10pm.

Public transport on Sunday will be free for anyone travelling in the Greater Dublin Area with a ticket to the Papal Mass.

Can I cycle around the city this weekend?

Cyclists will most likely be asked to dismount on roads that are fully closed. Cyclists will not be allowed in the Phoenix Park.

I live in Knock, what traffic restrictions will be in place?

I’m supposed to fly from Dublin at the weekend. Will my flight be delayed?

It shouldn’t be. Flight operations at Dublin Airport on Saturday and Sunday are not expected to be affected by the Pope’s visit. However, there will be a series of road closures on the normal route from the city centre to the airport so passengers are advised to plan their journey to and from Dublin airport accordingly. The Aircoach and Airlink 747 will be operating a normal service on Saturday and Sunday with some diversions.