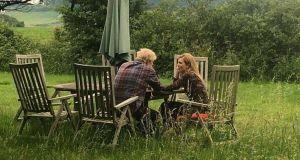 Boris Johnson and Carrie Symonds in a photo which appeared in some newspapers earlier this week.

Ever since the Court of Arbitration for Sport ruled that Caster Semenya’s testosterone levels were so high the runner would have to take hormone suppressants to compete against other women in certain events, intriguing possibilities have opened up. If women athletes can be ordered to undergo hormone therapy for the public good, how about some comparable therapy for men who aspire to the highest office?

Not all men would need it, obviously. The ones who feel compelled to boast about their “high” testosterone levels and the size of their appendages, as Donald Trump did in 2016, would be self-selecting. There would also be a little talk therapy. Do they actually believe, for example, that an incontinent, reckless impulse to have sex with just about anyone is the measure of a man?

In perhaps related news, the number of women alleging sexual misconduct and harassment against Trump has risen to 22, or thereabouts.

Boris Johnson would also be self-selecting. According to his biographer, Sonia Purnell, writing in the Sunday Times, he has boasted to other men that he needs plenty of women on the go as he is – saving your presence – “bursting with spunk”. It might explain that permanent air of adolescent, bumbling distraction. A British Court of Appeal judge, dealing with a gagging order around the existence of an extramarital Johnson child some years ago, raised questions about Johnson’s fitness for power because of his “recklessness” about pregnancy and the feelings of others when conducting “extramarital adulterous liaisons”.

That was a remarkable statement, given that the case revolved around privacy, not to mention the generally settled view that a politician’s private life is entirely his or her own business.

But where does that right to privacy begin or end for a future prime minister? The number of Johnson’s children is a matter for him and the mothers, but the “recklessness” described by the judge and Purnell’s observation that Johnson – a former Telegraph colleague in a small Brussels office – “has the fiercest and most uncontrollable anger I have seen” are surely germane to a person’s leadership qualities.

It’s also hard to ignore them in the context of a woman screaming “get off me” amid violent sounds of smashing and crashing loud enough to disturb the peace, where Johnson was the only other person present. Maybe the row at the apartment he shares with his partner Carrie Symonds was just a lovers’ quarrel after a few drinks too many, but which involuntary listener has the luxury of time to ponder? Or do you just decide on the basis of the class, wealth and fluency of the people involved?

Yet it was the neighbours who had reported the fracas who were harangued by the Tory/Brexit press. These were the neighbours who became alarmed, knocked three times on the rowing couple’s door, got no reply, and then called the police. It was hardly a neighbourly act to hand a recording of the furore to the Guardian. Then again, one of the two people in that flat was the front-runner for prime minster, which may or may not be the reason why the police first denied any knowledge of the late-night call-out – and only gave a statement when the Guardian quoted police vehicle IDs and the case reference.

The real point hammered home by that end of the media was that the neighbours were Remainers, therefore their concern must have been phoney. A prominent Daily Telegraph columnist, who once lamented that no one heeded the cries of a woman who was subsequently murdered with her child by a partner, compared them to the Stasi.

More often than not, a man behaving badly is the fault of the man, not his hormones

The new “hear no evil, see no evil” Conservative family values were on naked display at the Birmingham leadership hustings when their own interviewer was booed and heckled for asking Johnson whether a person’s private life has any bearing on their ability as prime minister.

Instead of answering the question, the politician – who continually declares that the people want straight-talking politicians – dodged and weaved, then insisted that “people don’t want to hear about that kind of thing”.

A journalist present said it felt like they were watching “the collapse of decency”.

Remember, these are mainly the older, more affluent end of the British electorate, the ones who used to bang on about character, morality and traditional values. Now the party has become so narrow, it can’t see beyond some deviant “authenticity” that will lead it to Brexit heaven. Character now is no more than a highly subjective take on masculinity, charisma and electability, rather than any objective reality.

Forget the hormone therapy. As the Harvard Medical School’s lesson concludes, “more often than not, a man behaving badly is the fault of the man, not his hormones”. And if that’s entirely his business, who cares?