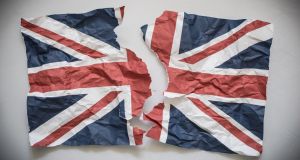 Some call for a UK-wide constitutional convention or a much more determined effort to codify its rules coherently.

Does Brexit pose a constitutional crisis for the United Kingdom? Can its constitution be remade after Brexit or is it too late for that to happen? What are the consequences for Ireland and Northern Ireland?

Constitutions are the set of fundamental rules governing a political system, usually defined as a nation. Typically they are written, short and legally entrenched, making them difficult to amend. Highly untypically, the UK’s constitution is unwritten and largely uncodified, sprawling over its common law and informal political conventions – even though the word was coined when the deposed King James II was accused in 1688 of having violated the “fundamental constitution of the kingdom”.

That continuing ideology was perfectly caught when the novelist AS Byatt last year told a disbelieving German writer, Matthias Matussek, in London: “You know, we British don’t need a constitution. We are the oldest democracy in the world.” She paused briefly before continuing: “For young countries like you Germans, constitutions could very well be useful.”

The unwritten rules are now precariously balanced between the doctrine of absolute parliamentary sovereignty subject in principle to the monarch, and the shift to entrenchment represented by the 2016 Scotland Act which declared its self-government permanent, only to be abolished by a popular referendum.

You know, we British don’t need a constitution. We are the oldest democracy in the world

At a conference last week in Mansfield College Oxford on remaking the UK constitution, the political theorist Stuart White said there is a real tension between these two conceptions of parliamentary and popular sovereignty. The Brexit maxim to “take back control” draws on both the notion of reversible treaty commitments and the 2016 referendum decision to leave the European Union. They are especially difficult to reconcile in a multinational polity like the UK where there is no longer a single people or demos.

Scottish speakers supporting independence and continuing Scottish membership of the EU said trust in London’s integrity as a source of law has collapsed as a result. One quoted Enoch Powell’s description of the political and legal realities involved: “Power devolved is power retained” – by Westminster and London, that is. Another said that, given the different social, cultural and legal values underlying Scottish and English society, she regards Britishness as a state not a national quality. After Brexit, “I have given up on Britain”, she said, raising the prospect of a neighbouring self-governed England liberated from such a top-down sovereignty.

Might not the very nakedness of our post-Brexit condition provide an impetus for Britain to follow almost every other democracy by enacting a constitution?

The US constitutional historian and theorist Bruce Ackerman coined the phrase constitutional moment as a period of crisis following events like civil wars, military defeat or revolutionary change. He distinguishes between the comparatively rare and heightened periods of constitutional politics and more typical normal politics.

Legal and political specialists at this conference debated whether on these benchmarks Brexit qualifies as such a crisis. Scottish nationalists say the moment for reformist change has passed; others call for a UK-wide constitutional convention or at least a much more determined effort to codify its rules coherently.

There is no denying the gravity of the issues at stake, explicitly expressed in its political rhetoric. Irish speakers like the UCD political scientist David Farrell were struck by the passion and polarisation at play in the discussion. His account of how citizens’ assemblies have recently brought greater popular deliberation to Irish democracy was avidly followed and widely admired as a possible model for UK constitutional change. Inserting that element into our politics has helped restore trust and legitimacy to a system badly bruised by the 2008-2014 financial crisis.

The Institute for British-Irish Studies in UCD has just announced an ambitious research project on constitutional futures after Brexit to study the effects of UK change and how they might influence constitutional developments in this State and Northern Ireland . It identifies four plausible scenarios of change in the UK: break-up through Scottish independence and Irish unity, as against the union’s survival in a renegotiated, differentiated or federal future.

Consequential and responsive change in Ireland North and South can be mapped out using established and innovatory methods of analysis together with deliberative citizen mini-publics and engagement with policymakers. We need maximum preparedness for such potentially momentous change.