The Irish Times view on the India-Pakistan standoff: the risk of miscalculation

Both sides have tried to calm the situation, but this is a moment of acute danger 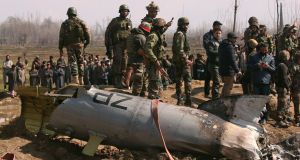 Indian soldiers stand next to the wreckage of an Indian Air Force helicopter after it crashed in Budgam district in Kashmir on Wednesday. Photograph: Danish Ismail/Reuters

The Hanoi summit between Donald Trump and Kim Jong-un may have ended in failure, but at least it distracted the US president for a few days from involving himself in the escalating standoff between India and Pakistan.

While Trump and the North Korean dictator were engaged in their largely theatrical meetings in Vietnam, elsewhere in south Asia two nuclear-armed powers were shooting at each others’ planes over their shared border. Neither side wants war and both have moved in the past 36 hours to calm a volatile situation, but the risk of miscalculation makes this a dangerous moment on the subcontinent.

The latest aerial skirmishes have their immediate origins in a suicide bombing that killed at least 40 Indian paramilitary police in Indian-controlled Kashmir on February 14th. The attack was claimed by Jaish-e-Muhammad (JEM), an Islamist group believed to have close ties with Pakistan’s powerful intelligence agency, the ISI.

With Indian public opinion demanding a response, and with prime minister Narendra Modi was keen to burnish his nationalist credentials in advance of national elections. New Delhi, for the first time in almost half a century, ordered its fighter jets across the border, where the Indian authorities say they struck a JEM facility and killed hundreds of jihadists (Pakistan says the Indian jets crossed only a short distance into Pakistan and fired at uninhabited forest). In the ensuing exchanges an Indian jet was shot down, with its pilot landing on the Pakistani side.

India and Pakistan both appear keen to avoid further escalation. India has said it sought only to attack terrorists, not soldiers. For his part, Pakistani prime minister Imran Khan announced his country would return the captured pilot “as a peace gesture” to India. “We should sit and settle this with talks,” Khan said. But they will need help from world powers to restore calm.

The Trump administration, which has not even got a permanent ambassador in Pakistan, lacks the experience and diplomatic wherewithal to intercede as George HW Bush or Bill Clinton did at moments of tension over Kashmir. It could lean on Islamabad to cut ties with JEM, but given Pakistan’s key role in the current round of US-Taliban talks, Washington may be loathe to apply too much pressure on the ISI for fear that the Afghan negotiations could collapse.

Previous attempts at the UN security council to designate JEM a terrorist group have been vetoed by China, a close ally of Pakistan. The US, France and the UK plan to bring the issue back to the table in the coming days, and this time Beijing should relent in the interests of regional stability. Ultimately, however, the responsibility falls to New Dehli and Islamabad. A good start would be for Modi to tone down the jingoistic rhetoric and take up Khan’s offer of talks.