Radical days at UCD – the Gentle Revolution 50 years on 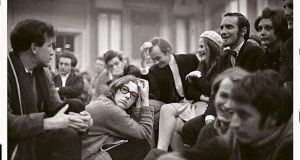 A 1968 “teach-in” at Earlsfort Terrace. Two of the Students for Democratic Action’s founders are in the photograph: Ruairí Quinn (with hand on head) and Una Claffey (wearing a beret). Photograph: Copyright Bill Hastings

Whenever I walk or drive past that tall building in Ballsbridge, I see him staring right at me. This is despite the fact that he exists only in my imagination and mind’s eye. The individual in question happens to be my younger self, an arts student at University College Dublin in days gone by, and he is walking up and down on his own, carrying a placard.

The location was the headquarters of Córas Tráchtála, the Irish Export Board at the time. The wording on the placard was along the lines of: “No to apartheid – stop Irish trade with South Africa. ”

The one-man picket took place against the background of raging controversy over the rugby international between Ireland and the visiting Springboks team, selected on a whites-only apartheid basis.

When the match took place on January 10th, 1970, in what is now the Aviva Stadium, a major demonstration took place outside the venue.

Aside from sporting links, Irish trade with South Africa was also a very hot issue and my little one-man protest was but a tiny part of the criticism expressed in that regard.

After a while, I got tired of marching up and down and went into the building to raise the issue more directly.

A very competent and experienced secretary kept me talking until an official from the export board came out to deal with the situation. I recall that his name was Hugh Kilfeather and, judging from the manner in which he listened to what I had to say, he was not unsympathetic to the case I was making.

A proposed trade mission from Ireland to South Africa was being strongly questioned and later, at the end of March, then-minister for industry and commerce, George Colley, announced it was being called off. This was hailed as a great victory by Kader Asmal, driving force in the Irish Anti-Apartheid Movement, who later became a government minister in post-apartheid South Africa. I would not be surprised if George Colley’s decision was supported by Hugh Kilfeather, who sadly died in June 1972 along with 11 other leading figures from Ireland’s business sector in the Staines air disaster where 118 passengers and crew lost their lives.

The point of the story here is that, little more than a year-and-a-half before my solo picket, such protest action would have been unthinkable on my part and most of my contemporaries. But we were fired-up by the student revolt of May 1968 in Paris which precipitated a general strike and seemed to bring La Belle France to the brink of revolution; ideologues called it “the detonator effect”.

There were grievances at UCD, mainly focused on the impending move of the Arts, Commerce and Law faculties to the suburban Belfield campus despite the lack of adequate library facilities. On February 26th, 1969, the recently-founded Students for Democratic Action (SDA) took over the college administration block at Earlsfort Terrace. Phase Two could have been where the forces of the State evicted us in a robust manner, perhaps leading to a general strike along the French model and ultimately the social revolution James Connolly had hoped for in former times.

The powers-that-be in the college had the wit not to call the cops.

Instead, a mass meeting of students in the Great Hall (now the main auditorium of the National Concert Hall) voted support for the demands of the occupiers but persuaded them to evacuate the administration block (now called “The Liberated Zone”), which they did. In light of that more moderate turn of events, the process was dubbed “The Gentle Revolution”.

The SDA was also deeply involved in militant protests against homelessness, organised by the Dublin Housing Action Committee, and demonstrations on issues such as the Vietnam War. In an Irishman’s Diary last July, I noted that the 50th anniversary of the occupation was approaching and urged anyone who was interested to email me at Ddebre1@aol.com for information. I am happy to report that two commemorative events have now been arranged: an inter-generational discussion at the FitzGerald Chamber in the UCD Student Centre at Belfield (yes, we finally moved) at 8pm on February 28th and an evening of music and memories in the John Field Room of the National Concert Hall on March 12th. The Belfield event is free and any surplus from ticket sales at the Concert Hall will go to the Peter McVerry Trust to help the homeless. Full details are online at