World View: West failed to learn from Asia and Africa on coronavirus

Rich regions dithered while others, scarred by Sars and Mers, swung into containment 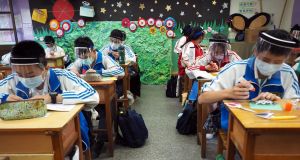 As deadly coronavirus swept across Europe over the past three months, other parts of the world had valuable time to gather information on the new disease, assess their own readiness and plan accordingly. They had time, in other words, to learn the lessons that Europe and the United States had failed to heed when Covid-19 spread in China in January.

Only in that limited sense – through an accident of timing – can the West be said to have led the way in fighting the virus. In fact, one of the striking facts of this first phase of the pandemic has been the failure of two of the world’s richest regions – western Europe and the US – to take control of the crisis without recourse to a policy that is in itself an admission of failure: the nationwide lockdown.

While in Asia the face mask is regarded as a vital public health tool, many western countries still question its value

Only belatedly have the US and much of Europe begun to absorb the lessons that regions more experienced in living with infectious diseases understood from day one.

Scarred by their own lack of preparedness when faced with the Sars and Mers outbreaks, many Asian states moved quickly to activate their containment plans as soon as news of a dangerous new virus emerged from China late last year. Among the common features of the approaches taken in Hong Kong, Taiwan, South Korea and Singapore were widespread testing, contact tracing, travel bans, quarantines and the use of masks in public places.

Outbreaks eventually occurred in all four places but – with the exception of Singapore, which is now grappling with a second wave after its initial success – their quick responses enabled them to bring the virus under control. None had to impose a Wuhan-style lockdown. In Hong Kong, bars and restaurants could keep their doors open.

Meanwhile, the US and western Europe had even more time to prepare themselves, yet governments appear to have wasted that opportunity. They could see from early February that the disease spread from human to human, that it was highly contagious and had a high mortality rate, and that one of the best ways to blunt its spread was through social distancing.

But they took a different lesson from the Sars and Mers crises: Covid-19, they assumed, was another distant menace that would not directly affect them. By the time lockdowns were introduced in Italy, France, Spain, Ireland and elsewhere, there was no other choice; the virus was spreading undetected in the community because of a failure to intercept it in its early stages. Even now, some of the lessons from Asia are being ignored.

Across Europe, moderately sick patients are being sent home, where they spread the illness to family members. While in Asia the face mask is regarded as a vital public health tool, many western countries still question its value and instead tell citizens simply to sneeze into their arms and, somewhat impractically, stay away from people.

The people of Sierra Leone, Guinea and Liberia know well that the WHO is fallible

Within Europe itself, the colour-coded map of infection rates and deaths from the virus suggests a clear divide. Those states that acted quickest had the best results. Of course, demographic factors, population density and pure luck have also played a role in the distribution of deaths, but a striking pattern has emerged in this first phase: eastern European states have been less severely affected that their western neighbours.

On Tuesday alone, as the Financial Times noted, Spain, Italy and the UK each suffered more deaths than the Czech Republic, Hungary or Slovakia have reported since the crisis began. Covid-19 hit central and eastern Europe later, and those countries’ governments used the time they had well.

Acting ahead of the World Health Organisation, countries such as Slovakia, the Czech Republic and Austria all quickly required their people to wear masks while outdoors. Not surprisingly, all of these states are now in the process of reopening.

It is not only wealthy democracies in Asia and eastern Europe that have lessons for the US and western Europe. African countries have learned a great deal from tackling epidemics such as HIV and Ebola.

The people of Sierra Leone, Guinea and Liberia know well that the WHO is fallible, given the agency’s slow response to the 2014 west African Ebola crisis.

That epidemic also showed the value of early testing and contact tracing, the importance of community involvement in control policies, and the need for an approach differentiated by region and local conditions. All of these insights form the basis of the Covid-19 mobilisation across the continent.

Experience and close study of other outbreaks on their own will not provide protection against the virus. Healthcare infrastructure, demographic factors and deprivation will ensure that some communities are more exposed than others to the worst of Covid-19. But without the ability to learn lessons, as the US and western Europe are finding out, governments are setting themselves up to fail.

1 Irish tourists excluded from visiting Greece and Croatia
2 Sideline Cut: Vignette shows why Bird is the true shark in The Last Dance
3 We need to pay very close attention to what is happening in Britain now
4 Taoiseach has confirmed schools will reopen at the end of August
5 The strain is starting to tell on Brendan O’Connor
Real news has value SUBSCRIBE