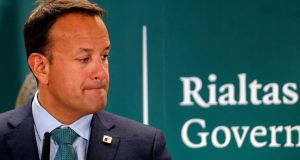 “We’re not out to coerce people, Leo Varadkar says. But if the climate crisis is as serious as he says it is, why not?” Photograph: Julien Warnand/EPA

Politics moves on the tide of great forces such as urbanisation, mass education, globalisation and economic growth. But its course also hinges on individual events and decisions, on women and men and their measures.

The biggest decision made by Irish politicians of the last decade (and perhaps the last few) was to avoid the juddering shock of an uncontrolled national bankruptcy in the wake of the economic crash in favour of a planned and managed process that saw a slow and painful rebuilding of the economy and the public finances. (Former Central Bank governor Patrick Honohan has been having his say on all this in a recent book.)

The first option would have been quick and unpredictable. The second was slow and grinding, but preserved as much of our pre-existing political system, our society and economy as possible.

For some people that preservation was a bad outcome, a missed opportunity to bring about great changes in the way we organise ourselves. But they are probably outnumbered by those who favoured the more conservative and cautious approach, even if in hindsight.

Whatever your view on it, there is little doubt that the choices made then were momentous, their consequences reaching into the lives of every person in Ireland.

Few choices faced by politicians are of such awesome importance, though Brexit may yet fall into the same category. But we are at a point in our politics where several far-reaching decisions loom.

The boom boomed for more than a decade. The bust and its after-effects went on for nearly as long. The politics that each period produced was as atypical as the economic conditions that prevailed. Now we emerge blinking into an era of challenges and choices which may be more conventional, but whose resolution will have a deep impact on people’s lives.

The Government presented a cluster of carrots to reduce carbon emissions. Necessary, but not sufficient; stick will also be required

As our nearest neighbour careers towards a political, economic and social catastrophe inflicted by bad politics, Ireland’s remarkable economic recovery of the past six years or so and the current and potential future health of the economy present an opportunity to deliver – by whomever – a decade of good government. Will it be seized? And by whom?

Acres of printed space and hours of broadcast time will be spent over the coming weeks and months in extensive windbagging about the potential composition of the next government. Much less time and energy will be spent discussing what it should do. So here are a few things.

The challenge of climate change is one, of course. This week, the Government presented a cluster of carrots to reduce carbon emissions. Necessary, but not sufficient; stick will also be required. Laws will have to be changed to accelerate behavioural change; people will have to be inconvenienced, some of them very seriously. A timid Government lacking political capital seems unsuited to the task. We’re not out to coerce people, Leo Varadkar says. But if the climate crisis is as serious as he says it is, why not?

Berlin has recently decided to impose a five-year freeze on rents in response to rising prices. Landlord and property interests would howl at and challenge such a move here

Take one small part of it: the target to have half of all cars on the road powered by electricity by 2030. That’ll happen only if the government makes electric vehicles cheap and petrol/diesel cars (a lot) more expensive. But there’s no plan for that, just good intentions.

Same problem with retrofitting houses, with phasing out oil and gas heating systems, and so on. That is not to say that these things cannot be done. They can – and, many would say, they must. But they will come at a cost, and somebody will have to pay for them.

The organisation and financing of our health services is something that will have to be faced up to. Everyone pays lip service to the Sláintecare plan, but there is little real enthusiasm in Government for the total separation of public and private health systems, not least because, as one Fine Gael TD (speaking for many colleagues, I suspect) says, the private parts of the system are those which work the best. A report sits gathering dust on Simon Harris’s middle shelf. Again, choices.

Another report, by now caked in dust, was compiled by Peter Cassells on the financing of third-level education. Bluntly: who pays? The State or the student? Or both, perhaps through loans? This is not a sectional issue. One of the reasons we enjoy our current prosperity is because of far-sighted investment in education. Yet that investment is faltering, squeezed out by more powerful and vocal lobbies.

And before the next government has decided to grasp the nettle on these lose-lose issues, it will have to address the housing crisis. That seems impossible without a more muscular approach to rebalancing the rights of private property and renters. Berlin has recently decided to impose a five-year freeze on rents in response to rising prices. The average cost of rent in Berlin is about €1,100 a month; in Dublin it’s more than €1,600. Landlord and property interests would howl at and challenge such a move here.

What about additional tax incentives for builders and developers to promote construction activity? Everyone else would howl and challenge.

We face big decisions. We should try to get our politicians to face them honestly and clearly

There’s the question of a new public-sector pay agreement. There’s the social time-bomb of the public-private pensions divide. There’s global tax reform and what it means for Ireland’s multinational honeypot.

Difficult issues will not be addressed without difficult decisions, and difficult decisions are often unpopular with lots of people. But our politics is too often allergic to annoying anyone at all. That’s short-sighted and self-defeating. There are some rows that it’s worth having.

At present, Fine Gael and Fianna Fáil only seem interested in having stupid rows with one another. All that knockabout stuff is fine, but it shouldn’t come at the expense of at least some honest debate about what course our country should take.

We face big decisions. We should try to get our politicians to face them honestly and clearly. And voters should do the same.