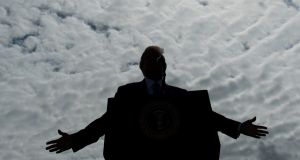 US president Donald Trump: US military and economic predominance was so complete through much of the 20th century that relative decline was always inevitable. Photograph: Brendan Smialowski

American fear about loss of supremacy is almost as old as the republic itself. If its people were to be believed, Dickens wrote, the country “is always depressed, and always is stagnated, and always is at an alarming crisis, and never was otherwise”. This fretting about decline is to some extent merely typical of a broader big-country indulgence; France has filled whole libraries in recent decades with morose reflections on the death of its own influence, while Brexit was at once a product and an accelerating agent for England’s anxieties about its place in the world. But the American strain is peculiar to itself in other ways. US military and economic predominance was so complete through much of the 20th century that relative decline was always inevitable.

The structure of the political system means that every presidential candidate runs against the present, decrying the mess made by the other side in the ruling duopoly and promising to restore the country’s standing. John F Kennedy’s successful campaign in 1960 was built on the claim that American influence was ebbing and that Russian prowess in science and engineering – Sputnik had launched in 1957 and Russian economic growth was believed to be outpacing that of the US – was opening a chasm between the two powers.

Every crisis, from the Iran hostage standoff to the 2008 financial crisis, has revived that self-doubt. Donald Trump himself is the ultimate declinist. Since the 1980s, when he took out a full-page ad in the big national papers bemoaning how other countries were taking advantage of the US, this has been his political credo. “This country is a hellhole,” he said during the Republican primary campaign in 2015. “We are going down fast.”

Proclaiming the end of American hegemony is one of the oldest tactics in the political toolkit, in other words, and so there’s a partisan incentive to exaggerate it. US economic dominance, its defence spending, its cultural clout and vast soft power all tell a different story.

Under Trump, the US has retreated from global leadership in a way that was unimaginable through the postwar era

And yet the current mood of decline seems more pervasive, more urgent, this election year. And it’s not only Americans fretting about it but US allies and enemies as well. Under Trump, the US has retreated from global leadership in a way that was unimaginable through the postwar era, reneging on international agreements such as those on climate and Iran’s nuclear programme while turning its back on the system of alliances it was largely responsible for building. The Covid-19 pandemic, which has already claimed more than 200,000 US lives and is rampant across the country, has exposed deep systemic problems in healthcare and political decision-making and, even more worryingly, revealed a breakdown in public trust and solidarity – one that has allowed the crisis to divide the country further, not bring people together. China, which claims to have all but eliminated the disease on its soil, has not been slow to highlight the contrast in fortunes between the two states. In Foreign Policy last week, the China specialist Rush Doshi argued that while Beijing may yearn for a reprieve from the erratic and aggressive Trump – and may for that reason, as US intelligence agencies have claimed, wish for a Biden victory in the November election – it also believes that Trump has weakened American power and accelerated American decline.

Some of the drift in American leadership under Trump could be reversed once he leaves office, whether that occurs in January or in four years’ time. Alliances could be revived, international accords readopted. But if American leadership is inseparably bound to values such as liberal democracy and the rule of law, as many Americans ardently believe, then the current signs of dysfunction and decay in its democracy are the real harbingers of waning authority. Just this week, we saw the results of systematic voter suppression as images circulated of thousands of people queuing for hours to cast an early vote. In Washington, Republicans were ramming through the confirmation of a supreme court nominee whom the sitting president believes could help decide the election in his favour. Thanks to a calcifying, virtually unamendable constitution and institutional logjam in Congress, that judge will be far more powerful than the architects of the system ever envisaged.

Finally, after a campaign shaped by the battle to raise the most money – a battle virtually without limits, thanks to a decision of that same supreme court – the outcome will be determined by an electoral system that gives disproportionate weight to small states and is therefore liable, as it has been on several recent occasions, to make the second most-popular candidate the victor.

For many Americans, a second Trump term is unthinkable. But when it comes to some of the country’s deepest problems, Trump is a symptom, not the cause.