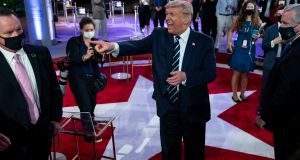 Power has revealed the true Donald Trump: vain, shallow, amoral, mendacious, irresponsible, incompetent. He has demeaned the presidency, and brought shame to the US. Photograph:Evan Vucci

Two and a half weeks away from the most important US presidential election since Franklin Delano Roosevelt’s win in 1932 put the country on a new path, change seems likely but not certain.

It is hard to overstate how much hangs on the result for the United States, and for the world. I think the result on Tuesday fortnight will be the most important thing to happen in the world this year, pandemic included. That means it matters to us, too. Political elites in Ireland have long prided themselves on their knowledge of US politics and cultivated links across the Atlantic. But this isn’t just a spectator sport. The whole world has a stake in the choice Americans will make on November 3rd.

Joe Biden’s lead in the national polls is constant and strengthened this week to double digits, aggregate surveys show. As things stand, the Democratic candidate is much more likely to win the election than Donald Trump. But elections produce upsets all the time and while it is unlikely that Trump will win, it is by no means impossible. The data analysts at 538.com have used their complex models to simulate the election 40,000 times; Biden won in 87 per cent of them.

He has a 95 per cent chance of winning the popular vote, while Trump has a 5 per cent chance, they estimate. The chances of a Biden landslide are at 36 per cent; for Trump, it’s less than 1 per cent.

But these are probabilities, not certainties. As 538.com warns, “upset wins are surprising but not impossible”. When you look at the states with the closest races – places like Ohio, Iowa, Georgia, Arizona, Texas, Nevada, Pennsylvania, Florida and North Carolina – many of the polls are closer. And anyway, the polls haven’t always proved infallible in the past, have they? But it’s clear that Biden is ahead and on course – as things stand – for victory.

Let’s hope so. I think it’s vital that Trump is defeated – and the more convincingly the better – for three main reasons.

First, he is a dreadful leader of the world’s most powerful and richest nation. He has no time for the global rules-based order which is the only defence of small countries such as Ireland from larger countries which seek to enforce their will and pursue their interests. The most egregious example of this is his abandonment of the Paris climate accords, but Trump has also launched assaults on the United Nations, the World Health Organisation and the World Trade Organisation, as well as undermining multiparty agreements such as the Iranian nuclear deal. None of these bodies are above criticism, and sometimes the criticism is more than warranted, but without global bodies that promote co-operation and enforce agreed rules, it’s everyone for themselves. That is a world that is more congenial to the dictators and autocrats to whom Trump has cuddled up, but it is also a world that is poorer, more brutal and more dangerous for its people.

Sure, there is much to criticise about the post-war global order, underpinned by US military hegemony and the almighty dollar. There is also much to praise. Major wars have been avoided. The world has become richer and healthier. Globalisation has its downsides, and the political freedom that its proponents assumed would follow economic liberalisation hasn’t materialised in lots of places. But it has helped drag two billion people out of abject, dollar-a-day poverty in the last three decades. The effect on health standards, life expectancy and women’s rights of this climb out of poverty has been as you would expect.

At home, Trump has promoted division, rolled back environmental regulation, fuelled racial tension, encouraged extremist politics and proved hopeless at managing the challenge of the pandemic. If chance favours the prepared mind, adverse events such as the pandemic are better dealt with by well-organised and effective governments. The fact that the world’s richest nation is worst-hit by Covid is an indictment of its leadership and bears out what those who watch the Trump presidency most closely say: he is absolutely useless at running the US government.

The second reason I want to see him defeated is I think it is important that a person like Trump is rejected by those to whom he is accountable. It is one thing for American voters to have elected Trump on a wave of populist revolt against elites; it would be quite another for them, having seen him in office for four years, to re-elect him in the full knowledge of his character. As was said of Abraham Lincoln, power reveals. Power has revealed the true Trump: vain, shallow, amoral, mendacious, irresponsible, incompetent. He has demeaned the presidency, and brought shame on his country.

When he stood on the brink of winning the Republican nomination in 2016, the Nobel-winning economist and author of The Conscience of a Liberal, Paul Krugman, observed: “Donald Trump is an ignoramus.” Everything he has done since has confirmed the diagnosis.

Ireland’s interests are served not just by a Trump defeat, but by a Biden victory

The third reason to hope for Trump’s defeat is that Ireland’s interests are served not just by a Trump defeat, but by a Biden victory. The Trump administration has been stuffed full of Irish Americans, but a Biden administration would be committed to international co-operation, trade and the western alliance – all vital to Ireland’s prosperity. Biden is even more prone than most Irish-American politicians to a bit of misty-eyed toora-loora but his principles and policies are in tune with the Ireland of today.

Staring defeat in the face, I suspect that Trump, entirely unmoored to the norms and proprieties of his office, is likely to do anything. If he loses, there is no guarantee he will concede the election or co-operate with a peaceful transfer of power. This is moment of real danger, but also of history in the making. The world holds its breath.