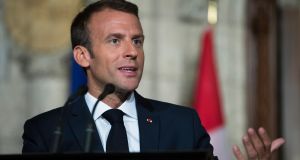 French president Emmanuel Macron: his proposals were pitched unrealistically at a German audience and he is now isolated by the lack of southern allies. Photograph: Ian Langsdon

The euro is a “German cage”, according to Italy’s new minister of European affairs Paolo Savona.

The description has caught political and media imaginations around Europe, since it encapsulates the tension between German policy and the new Italian populist coalition, which believes the euro regime favours German surpluses at the expense of Italian and other southern European economies. Savona was rejected as minister of finance for saying Italy could or should leave the euro.

The new configuration highlights the uneven balance of interests and values between northern and southern Europe as the EU faces into similar tensions over migration and liberal values between its western and eastern members.

Germany’s cage was reinforced during the financial and austerity crises of 2008-2014 when its preferred monetary, fiscal and spending rules dominated the EU’s response. That incremental process of muddling up towards a more functional euro regime saved the single currency project but left it incomplete.

Germany remains a reluctant economic hegemon. It rejects providing greater fiscal space, transfers and mutual debt to weaker euro zone partners in return for enjoying continental access to markets and finance. This week’s response from chancellor Angela Merkel to French president Emmanuel Macron’s ambitious plans fall well short of the more integrated system he proposes. Under pressure from right-wing parties and her own backbenchers, she prefers a strictly intergovernmental regime to his more institutionalised one.

Savona is a senior figure in Italy’s business and commercial life but unusual for his frank criticisms of the euro regime and advocacy of a Plan B parallel currency or even an Italian exit if that does not work. Other Italians and other economists share several of his criticisms even if they want the euro to survive. The question they pose is whether the single currency is functional without Macron-type reforms.

The question they pose is whether the single currency is functional without Macron-type reforms.

Merkel’s willingness to make more progress on banking union, a limited European Monetary Fund to issue conditional commercial loans and a limited fiscal buffer for crisis-hit states is a gesture in Macron’s direction. Yet it falls far short of the flexibility, bailouts or debt write-offs implicit or explicit in Greek and now Italian demands and which many experts say remain necessary to deal with future shocks. These two states cannot be compared in terms of scale, but share features as southern members of the EU. Spain’s new government shows signs of a greater commitment to such European solidarity, as does Portugal’s more long-standing left-wing coalition.

These political changes raise an interesting question about Macron’s France and its role as a broker between north and south in the debate about the euro’s future. His proposals were pitched unrealistically at a German audience and he is now isolated by the lack of southern allies, revealing France’s longer standing relative disregard of Italy. If the Italian coalition’s admittedly incoherent economic programme is summarily rejected by northern Europe that could deliver a political shock revealing the failure to make more solid political progress on euro reform when the opportunity was there. For Germany it would pose the question of whether a more capacitated euro regime is to be preferred to its potential collapse.

Ireland has positioned itself with the northern Hanseatic group of middle-sized, smaller  (and mostly Protestant liberal) EU states in this debate, openly critical of Macron’s euro agenda. That reflects our new status as an EU budget contributor as well as the successful transition out of the rescue regime from 2014. Association with southern Europe now would be reputationally toxic according to the conventional wisdom, notwithstanding that near recent past. In the week when David Drumm was found guilty of conspiracy to defraud and false accounting of Anglo Irish Bank, at the eventual cost of €29 billion to the Irish taxpayer, that is an expensive irony.

Ireland remains the third-largest indebted EU state and despite the rapid recovery we have a fundamental interest in a well-functioning and resourced euro regime to guard against future shocks. If the system collapses, we would be pitched back equally rapidly into the UK orbit from which we are currently trying frantically to escape. That would represent a return to even greater dependency on a disintegrating Anglosphere than before.

In that perspective, Ireland’s latest positioning in the fast-changing new European configuration as a member of a group even more cautious than Germany looks imprudent. It reflects more a Fine Gael view than a cross-party one and a Department of Finance perspective more than a cross-governmental one. Do opposition parties agree with it? We need more political debate here on Macron’s proposals.

1 Coronavirus: 133 patients in intensive care as pressure on hospitals builds
2 A letter to Ireland from Italy: this is what we know about your future
3 Look on the bright side: International Space Station visible in Irish skies tonight
4 Tempers fray as coronavirus lockdown fatigue hits Italy and Spain
5 Coronavirus: Letters flow to self-isolating father whose children were found dead
Real news has value SUBSCRIBE