An Irishman’s Diary on a remarkable Irish judge

By 1914, James Creed Meredith was a committed nationalist and an organiser of the Howth and Kilcoole gun-runnings 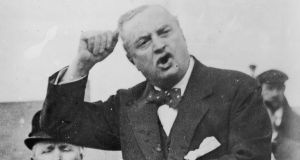 Although James Creed Meredith’s sympathies in 1914 were with John Redmond (above) and the Irish Parliamentary Party, he became a Sinn Féiner after 1918 and was sufficiently trusted to play one of the most important roles in the embryonic republic. Photograph: Topical Press Agency / Stringer/Getty Images

Compared with the other revolutionary events of 1920, a legal ruling handed down that year by a judge named James Creed Meredith is now little remembered. But it was ground-breaking in its own way and, had the Civil War not followed, or ended differently, might have marked the beginning of a new era.

Meredith had just become president of the Irish Supreme Court, one of the parallel bodies set up by the Dáil to replace British rule, even as the War of Independence raged. He was asked to consider a case in which a mother sought maintenance payments for a child born out of wedlock. And ruling in her favour, he bypassed the usual common law, which would not have helped her, in favour of an older authority, Brehon Law.

This briefly set a precedent in such cases for the Republican Courts in general.  But the Brehon enthusiasts, who had also included veteran nationalist politician Laurence Ginnell, were mostly on the losing side in the Civil War. Their short-lived innovation ended when the Free State wound up the Dáil courts and reverted to something more like the status quo in 1924.

Even though Meredith had been on the Civil War’s losing side, his all-round brilliance was not neglected in the Free Stat

In the meantime, the ruling had been another milestone in the remarkable life of the judge himself. Born in 1875, into a family full of Protestant clergymen, he was the son of a prominent freemason: the deputy grand master for Ireland no less, who still has a lodge in Belfast named after him.

But by 1914, the younger Meredith was a committed nationalist and one of the organisers of the Howth and Kilcoole gun-runnings. He probably drafted the constitution of the Irish volunteers. And although his sympathies then were with John Redmond and the Irish Parliamentary Party, he became a Sinn Féiner at some point after 1918 and was sufficiently trusted to play one of the most important roles in the embryonic republic.

Law and politics aside, he was a man of multiple talents. A gifted student of philosophy, he won gold medals for his studies at the Royal University and Trinity College, and later (1911) translated Kant’s Critique of Judgement for Oxford University Press, in a version still widely read today.

He was also a brilliant athlete, specialising in the “quarter mile”, for which he won the British championship while at Trinity, running the 440 yards in 52 seconds. He could handle a sailboat too.  Having helped organise the event, he was an actual crew member on the yacht that landed guns at Kilcoole.

Even though he had been on the Civil War’s losing side, his all-round brilliance was not neglected in the Free State. He was eventually appointed to the new Supreme Court, when in 1936 it was expanded from three to five members. Until then, he had to settle for being a judge of the High Court. But it was in this capacity that he made another landmark judgment in a family law case, in 1932.

That one centred on Máire MacSwiney, 14-year-old daughter of the late Terence, whose hunger strike of 1920 had left her without a father. She had since been raised, mostly in Germany, by her mother Muriel. But theirs was not a close relationship, either.  “History deprived me of my father,” Maire would write in her memoirs. “My mother deprived me of herself.”

Terence MacSwiney must have foreseen such problems because in his will, he appointed his sister Mary as Máire’s joint guardian. But then Muriel brought the child with her to the continent, fleeing family connections and Catholicism and replacing them with communism, a cause for which she had more time than she did her daughter.

The end came in 1932, when Mary visited from Ireland at a time when Máire was facing an unwelcome move to a new school.  Muriel subsequently claimed it to be a “kidnap”. But as Mary Leland wrote in this space some years ago, it was more of an escape, as the teenager “chose to go with the aunt on a breathless dash across the Austrian border from the German village of Grainau onto Geneva and Ireland”.

Back home, it was into Meredith’s lap that this delicate case, involving a daughter of the revolution, and fought bitterly over several months, fell.

His judgment was Solomon-like but simple. As Frank MacGabhann summarised it in an essay on Meredith for the Dublin Review of Books earlier this year: “[He] decided to speak with the girl privately in his chambers. By then she understood some English. He asked her with whom she would like to live. She replied “my aunt”. Meredith awarded custody to the aunt.”