Emily in Paris tiptoes in the footsteps of Beckett, Lenin and Diderot

An Irishman’s Diary: In which Houellebecq’s latest novel goes head to head with EIP 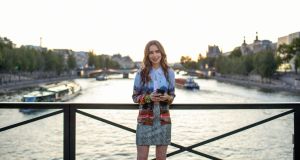 ‘By stark contrast with EIP, which has been derided for its ridiculously romantic view of Paris, I have recently been reading Michel Houellebecq’s latest novel, Serotonin, which is also set in that city, but without the romance.’ Above, Lily Collins in Emily in Paris. Photograph: Carole Bethuel/Netflix © 2020

I have at least one thing in common with Emily in Paris, it turns out.  On recent visits to the city, I too have frequented a charming corner of the Fifth Arrondissement called the Place de l’Estrapade. That’s where Emily lives, in her unrealistically large and glamorous apartment. My excuse is that it’s a two-minute walk from the old Irish College, now the Centre Culturel Irlandais, whose more monastic accommodations I have sometimes called home.

Speaking of monastic, I had a very pleasant dinner-for-one a few years ago in a restaurant on the corner of Rue de l’Estrapade. Pleasant, except that I was extremely conscious of the empty chair opposite, because it was one of those tiny places where every table counts.

And seeming to notice this, the restaurant dog (an animal of uncertain but impeccable breeding) joined me briefly during the meal, like a four-legged maître d’.  He even rested his head on my lap for a few moments, which is not something French maître d’s do normally.  It was a reassuring gesture, as if to say that he, at least, didn’t think I was a loser. Mind you, it also instantly made us the only topic of conversation (“Ah, look!”) at every other table.

That restaurant does not seem to have featured in EIP yet.  But the boulangerie on nearby Rue des Fossés Saint-Jacques has.  So has the Italian bistro, disguised as a French one. And other parts of the local scenery are familiar too. When Emily dumps her boyfriend by phone to Chicago, the backdrop is the Pantheon, home of the famous dead.

Comparisons between Emily’s experience of Paris and that of Samuel Beckett may be limited, but he too lived in this area once. In fact Rue d’Ulm, which crosses Rue de l’Estrapade, was his first Parisian address, when he was a live-in lecturer at the École Normale Supérieure.

Inevitably, he had a less glamorous view than Emily: looking out, as he wrote, on “the bare tree, dripping; then, behind, smoke from the janitor’s chimney pot, rising stiff like a pine of ashes; then beyond, beyond the world, pouring a little light up the gully that westers to the [Jardin du] Luxembourg.”

It might also surprise Emily to learn that the Place d’Estrapade is named after a form of medieval torture.  This involved suspending the victim by the wrists, typically with arms tied behind their backs, and sometime with weights added to the body, the better to dislocate joints.

Another former resident of the area, the enlightenment philosopher Denis Diderot (1713–1784), mentions it in his Encylopédie, which he wrote “to change the way people think”. In the case of the torture, happily, thinking had already changed.  According to him, the estrapade was “no longer used, at least in France”. Only the street name survived to hint at past horrors.

Diderot lived at No 3 Rue de l’Estrapade – as, more than a century later did Lenin. But I doubt if Diderot, Lenin, Beckett, and the Centre Culturel Irlandais combined have brought half as many visitors to the area as Emily is about to unleash, whenever coronavirus allows.

For the fate of my corner restaurant and its dog, I don’t know which is more worrying: the pandemic or the next outbreak of mass tourism.

By stark contrast with EIP, which has been derided for its ridiculously romantic view of Paris, I have recently been reading Michel Houellebecq’s latest novel, Serotonin, which is also set in that city, but without the romance.

As usual, his main protagonist is a miserable middle-aged man at odds with the modern world.  Needing to escape a toxic relationship, he moves from the well-heeled 15th arrondissement to the gritty 13th. And although that might not sound like a failsafe plan, it works, because (like Emily), his other half would not be caught dead in the less fashionable parts of Paris

The cliches of EIP include people smoking inside buildings, the way Parisians supposedly do. This would be news to Houellebecq’s character.  A running theme of the book is a 21st-century form of torture, by which addicts like him are wilfully deprived of nicotine by hotel managers and other sadists.  His hero reminisces of one former address: “and it was there that I destroyed my first smoke detector”. But it’s a losing war, he concedes.

For that and other reasons, the character declares: “I didn’t just hate the district of Beaugrenelle, I hated Paris; that city infested with eco-friendly bourgeois”. The book is a long way from EIP. And yet, if you put the two together and averaged them out, you might get an accurate enough portrait of life along the Seine.