Support exists for ‘soft oft-out’ system, and progress has been made – but is still too slow 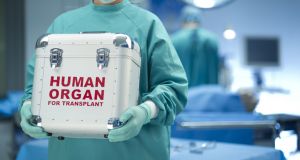 A comprehensive report on organ donation in Ireland was published by the Oireachtas committee in September 2013.

A year ago the then Minister for Health Leo Varadkar announced during Organ Donor Awareness Week that the Department of Health was working on legislation to introduce an opt-out system of organ donation, where it is assumed that individuals intend to donate their organs to medical use when they pass away.

One year later and we have nothing to show, no signs of progress and no date for the new legislation required. Why? There is no doubt that with the opt-out organ donation system in place, many additional lives could have been saved in the past year.

A surprising fact is that most of the ground work has already been done allowing for the implementation of the opt-out organ donor system here. Four years ago, the Oireachtas Joint Committee on Health and Children received submissions from stakeholders in the field of organ donation including doctors, consultants and surgeons as well as organisations and representative groups, interested individuals and the Department of Health. A comprehensive report on organ donation in Ireland was then published by the Oireachtas committee in September 2013 and a Dáil debate followed.

So why the delay, nearly four years later? It is baffling. In February 2014, more than three years ago, the then minister for health James Reilly stated during that Dáil debate on organ donation: “I am also aware that a number of practical issues need to be addressed before the opt-out system is introduced, including the establishment and implementation of a register. These issues will be addressed in the coming months as the legislative proposals are drawn up and an implementation plan is developed.”

It is not that the then minister had no support. The Oireachtas committee actually recommended the introduction of an opt-out system allowing the family of the next of kin to always be consulted to ensure the maintenance of the principle that organ donation is a gift. This is termed the “soft opt-out” system. The committee also highlighted its strong view that any transition to a soft opt-out system must be supported by increased investment in essential infrastructure, transplant surgeons and trained support staff. Since 2013 it has been very clear to all ministers for health that there is a groundswell of support behind the opt-out system.

In December 2015 Wales introduced the “soft opt-out” system. As a result there was an immediate increase in organ donations

On January 1st this year, France went a step further and introduced a new law which presumes consent for a deceased’s organs to be removed, even if it goes against the wishes of the family. While it would not be the preferred option for many, adopting such a law shows how seriously other countries are taking the lack of adequate organ donations being made available for transplants.

And that brings us to one of the most important factors on the road to any organ donation. It is important that all prospective organ donors discuss their wishes with their families. Once that discussion has taken place bereaved family members are found to be supportive of their deceased relative’s wishes. The importance of such a discussion taking place cannot be over-emphasised and if you are reading this article and wish to be considered a possible organ donor, please have that discussion with your relatives today.

To put it simply – lives are saved. In my own case I am a living organ donor having donated a kidney to a friend who has since moved from nightly dialysis in early December to heading off on his holidays in early March. It was simply remarkable to see such a change in a few short months. It is what organ transplants can do.

Enda Fanning is an architect and Sinn Féin councillor for the Templeogue-Terenure area.

1 With Lincoln looking on, the crowd dropped to their knees as 7pm approached
2 ‘Tralee felt friendlier than Killarney. We discovered a different welcome there’
3 In six months we will be in the grip of a 1980s-style recession
4 Luke ‘Ming’ Flanagan bares his bottom half to European Parliament
5 Coronavirus: 25% of new cases arising in the community with no know link to other cases
Real news has value SUBSCRIBE