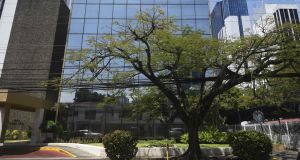 Panama-based Mossack Fonseca’s offices: Documents leaked from the law firm 12 months ago prompted over 150 official inquiries, audits or investigations in over 79 countries around the world but little has changed. Photograph: Rodrigo Arangua/AFP/Getty Images

This week marks one year since the publication of the Panama Papers when 11.5 million documents were leaked from Panamanian law-firm Mossack Fonseca to the International Consortium of Investigative Journalists.

The papers gave us all a rare glimpse into the hidden world of tax havens.

They revealed how shell companies and anonymous trusts are used to hide the profits of tax evasion, trafficking, corruption and other crimes.

In the days following the leaks, many governments were keen to underline the need for urgent action to prohibit shell companies and ensure transparency. The revelations prompted over 150 official inquiries, audits or investigations in over 79 countries around the world, while an estimated $135 billion was wiped off the total value of nearly 400 companies after the Panama Papers.

However, despite the magnitude of the revelations, the disappointing reality is that one year later, the global tax system remains full of murky corners and gaping loopholes.

Nowhere is this more evident than in the European Union, where member states, including Ireland are failing to respond with policy and legislation commensurate with the scale of the problem revealed by the leak.

The main policy response from the EU to the Panama Papers has been an attempt to introduce registers listing the true flesh-and-blood owners of companies. This would mean the anonymity tax dodgers and money launderers rely on would be stripped away and the actual beneficial owners of companies would be revealed.

While there has been some progress on this important proposal, its potential is in danger of being undermined. A number of countries, including Ireland, are apparently opposed to making the register public, citing the privacy concerns of company owners.

However, privacy concerns have previously been addressed by the UK government, which in 2014 assessed the legitimacy, necessity and proportionality of its public beneficial owner register and found it to be in full conformity with the data protection and privacy rules afforded under the European Convention of Human Rights. The UK was an early adopter on this issue, and has already introduced a fully publicly accessible register.

A second important EU proposal being negotiated would require companies to report on their activities in each of the jurisdictions in which they operate. This would give the full picture of what a company is up to, and give interested parties such as the media, civil society and investors a full understanding of what a company is doing and where, and allow them be held to account.

Crucially though, the EU proposal wants to limit this proposal to companies based only in the bloc. This will undermine the very purpose of the proposal, as companies will be incentivised to shift profits into countries beyond Brussels’ remit. Furthermore, it means most developing country citizens or governments will have no access to information about their home countries, despite the fact that profit shifting has a bigger impact on them than developed countries. The International Monetary Fund estimates that developing countries are losing as much as $200 billion a year to corporate tax dodging.

The EU also wants to limit the publicly accessible register to companies with a turnover of over €750 million – which would rule out over 90 per cent of companies, according to the OECD.

Worryingly, Ireland seems opposed to company information being made public, having already legislated for a form of country-by-country reporting that would remain private.

The Panama Papers leak was never about one law firm in one country. It was about a tax haven industry that feeds on opacity and loopholes in jurisdictions around the world.

Previous scandals have revealed different aspects of the dysfunctional global tax system. For example, the so-called Lux Leaks scandal showed how Price Waterhouse Coopers had negotiated hundreds of secret tax deals between multinational clients and Luxembourg. In some cases, these secret deals allowed the corporations to lower their tax rate to less than 1 per cent.

Negotiations on the EU proposals might still produce strong regulation that at the very least will make it harder for money launderers, tax evaders and terrorists to shift ill-gotten gains around with impunity.

The final EU position will be a result of negotiations between the European Parliament, member states and the European Commission. The parliament is entering negotiations with strong and ambitious counter proposals, which would represent a meaningful and appropriate response to what was revealed in both the Lux Leaks scandal and the Panama Papers.

But efforts by Ireland, or any other member state to water them down, will only create further regulatory and tax loopholes and allow the cracks in our broken tax system to widen.

1 Dublin stabbing: Parking space was at centre of previous rows, gardaí told
2 People often ask me why I never want to go back to Ireland
3 Miriam Lord: Lady Lou crowned The People’s Taoiseach at Liberty Hall
4 Soreness is good, scales are pointless: The 10 biggest myths in fitness
5 Coronavirus: More matches will be cancelled if necessary, Ross says
Real news has value SUBSCRIBE