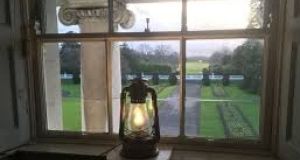 “There will always be a light on in Áras an Uachtaráin for our exiles and our emigrants.”

One of the most symbolic acts of Mary Robinson’s presidency was the placing of a light in the window of her official residence in the Phoenix Park.

It resonated, she said, with the tradition of her home town of Ballina, where people would light a candle and put it in the window in the run up to Christmas.

She did it in order to make good on a promise made in her acceptance speech that “there will always be a light on in Áras an Uachtaráin for our exiles and our emigrants”.

That promise in turn reflected an extraordinary campaign which saw Robinson take her message of inclusiveness to isolated communities in the west of Ireland, deprived ones in the inner city and Irish emigrant communities. She spoke movingly of the poverty, depression and mental illness endured by forgotten Irish emigrants.

Robinson also introduced the word diaspora into the popular lexicon and that one word came to define a whole new way of looking at Irish emigration. The millions of people around the world who claimed some sort of affinity with Ireland were to be nurtured and acknowledged.

Robinson’s insight resonated extraordinarily well both at home and abroad. She later wrote about the tears that came to the eyes of legendary Irish-American politician Tip O’Neill when she walked him down the steps of the Áras into the formal garden and he turned to see the light in the window under the portico.

In the intervening 27 years, Robinson’s moment of perception has been cynically exploited by successive governments; most memorably in the Gathering in 2013 when all sorts of heartstrings were tugged to bail out a struggling tourism industry. We now have a Minister for the Diaspora, Joe McHugh, whose job presumably is to milk them for all they are worth.

Things reached a nauseating point this week when the Taoiseach floated the notion of giving the diaspora – or at least a significant number of them – a vote in the presidential election.

On the face of it, the move would neatly close the circle that started with the election of Robinson in 1990. But it ended up looking like the latest wheeze to keep the diaspora racket going. The mealy-mouthed nature of the offer quickly became apparent. The Government will explore a number of options to extend the franchise; something it has been doing since the idea was first mooted by the citizens’ convention some four years ago.

But the announcement served its purpose by giving the Taoiseach a bone to throw to the diaspora at this most important recruiting time. Kenny said he was “especially pleased to be making this announcement as we prepare for our worldwide celebration of St Patrick’s Day and of all that is Irish”.

The news caused a bit of a kerfuffle among the non-diaspora Irish, which quickly died away once the half-hearted nature of it became clear. But not before it surfaced a few home truths about what we really think about the diaspora and their place in the scheme of things.

During the 24 hours or so that people thought that Kenny might actually be sincere in his offer to extend the presidential franchise, a lot of number-crunching was done. People came to the alarming realisation that there are almost as many potential voters outside the Republic as in it. According to Joe McHugh there are about 1.87 million in Northern Ireland and a further 1.8 million citizens living outside the island of Ireland. There are enough of them to determine the outcome of the election and their interests are not necessarily aligned with those of the citizens living in the State who pay the taxes that keep it going.

The sum of all fears seems to be Gerry Adams in the Áras in 2025, propelled by a coalition of American barstool republicans and the Sinn Féin electoral machine in Northern Ireland.

It is very hard to see this – or something along these lines – being allowed to happen. The chances are that the referendum on this – if it comes to pass – will have all sorts of caveats and time limits restricting the size of the overseas franchise.

The process of deciding who gets to vote and who doesn’t will bring a much needed dose of reality to the whole diaspora circus but also risks opening up a damaging debate about who is Irish and who isn’t.

The single biggest threat to the current political status quo is, of course, allowing Irish citizens in Northern Ireland to vote. Trying to pick and choose who in the North should be allowed to vote and who shouldn’t would not only be wrong, it would make a mockery of the fundamental rationale for the modern Irish State.

Equally, trying to find some way to exclude the sort of Irish Americans who helped vote Donald Trump into office would be difficult and would highlight something nobody really wants to face up to: Irish America has moved sharply to the right.

A bit like Mary Robinson’s candle – which had to be an electric imitation for health and safety reasons – the Irish diaspora is not something that bears too much scrutiny.