Why Europe will side with the US over China for 5G 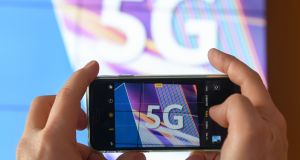 A journalist takes pictures of a projection screen prior to the start of Germany’s auction for the construction of an ultra-fast 5G mobile network on March 19, 2019 at the German Federal Network Agency(Photo by Arne Dedert / dpa / AFP)

The Nato summit last week did not present an inspiring picture of western unity. The assembled leaders sniggered behind each other’s backs and squabbled childishly.

But the official Nato communiqué did contain one significant new departure. For the first time ever, it mentioned China, stating that Beijing’s growing influence poses challenges that “we need to address together as an alliance”. That statement, bland though it is, will be regarded with alarm in Beijing and delight in Washington. With the US and China locked into an increasingly heated rivalry, the Nato meeting signalled that - slowly, hesitantly - America’s European allies are beginning to swing behind the US.

The key issue to watch here is Huawei, the Chinese telecoms firm, that is bidding to build 5G broadband networks across the world. The US has blacklisted Huawei, imposing sanctions that prevent the Chinese firm from buying components from America. Senior officials in Donald Trump’s administration are passionate on the surveillance risks posed. I have heard one suggest that adopting Huawei technology is like “inviting the Chinese government into your bedroom”. He added that European governments that allow Huawei to build their 5G networks are “insane”.

For many months, this superheated American rhetoric made limited progress. Japan, Australia and New Zealand announced their intention to keep Huawei out. But the US’s European allies did not follow suit. Despite Washington’s lobbying, Huawei has made considerable progress in signing up international customers for 5G. As a recent article in Nikkei Asian Review points out: “So far, the company has sealed 65 contracts, with almost half coming from European countries.”

But attitudes in Europe are now shifting. Mr Trump lobbied hard at Nato and claimed to have secured Italian agreement to shut Huawei out. Boris Johnson, UK prime minister, said that Britain would not allow Huawei into its 5G network if that endangers the “five eyes” intelligence-sharing arrangement with the US. This pledge hands the Americans a powerful lever. There are also suggestions in Congress that a UK-US free trade agreement would be endangered if Britain works with Huawei.

Angela Merkel, the German chancellor, has kept the door open for Huawei. But a backlash is under way in the German parliament led by Norbert Röttgen, head of the Bundestag’s foreign-affairs committee. He casts the issue as one of “European sovereignty”. Faced with this onslaught, the Merkel government is beginning to shift position. In a recent interview, Peter Altmaier, Germany’s economic affairs minister, spoke of the need to promote European suppliers of 5G to compete with Huawei.

The European shift is partly down to American pressure. But many Europeans were already taking a more jaundiced view of China. An important moment came earlier this year, when the European Commission issued a paper that described China as a “systemic rival”.

The EU has belatedly woken up to the fact that China is much more than a large market. It is also an authoritarian state with an increasing influential presence in Europe. Beijing’s efforts to cultivate 17 European countries through a diplomatic dialogue known as “17+1” has excited suspicion in Brussels, where it is seen as a Chinese effort to buy influence and disrupt EU unity. European industry is also taking a more sceptical attitude towards China, echoing many American complaints about market access and intellectual property theft.

Industrial policy is also coming back into fashion in Europe, making it easier to argue that 5G is a strategic industry, whose development cannot simply be left to market forces. There are two European companies that can offer 5G technology: Ericsson of Sweden and Nokia of Finland.

But while the Europeans are now more receptive to American arguments on 5G and wider Chinese issues, actually changing policy poses significant problems. Shunning Huawei in favour of a European solution is likely to lead to a more costly and slower deployment of the technology. Even more dauntingly, Huawei equipment is already embedded in the existing telecoms systems of Britain, Germany and other European nations. Ripping it out would be expensive and disruptive.

There is also a fear that banning Huawei would invite Chinese retaliation, damaging access to the world’s fastest-growing market. And Mr Trump is regarded as an unattractive and unreliable partner who could easily target Europe with the kind of trade sanctions he has already aimed at China.

The speed and cost advantages of Huawei 5G is likely to mean that it will continue to find many willing customers outside the west. That means that Huawei will stand a good chance of establishing a global standard in 5G, pulling its customers into a China-dominated tech world - while the west is left in the unfamiliar position of falling behind on advanced technologies.

The 5G decision is likely to be the first of many such awkward choices for Europe. For as long as possible, European countries will try to keep both Washington and Beijing happy. But if America’s key allies, such as Britain and Germany, are forced to choose, then values, economics, security and strategy will all point in the same direction. They will have to choose the US over China.

Gideon Rachman is a columnist with The Financial Times

1 Dublin house deaths: woman still being treated in hospital
2 Ireland’s housing crisis in five revealing graphs
3 A Ryan Tubridy interview takes a terrifying twist
4 Some get up early to go to the gym, others because they slept in a doorway
5 Des Bishop: ‘The last time my mother spoke was to say sorry’
Real news has value SUBSCRIBE