Paul Krugman: Racism comes out of the closet 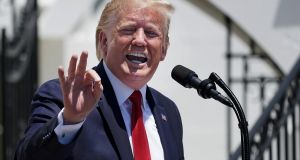 U.S. President Donald Trump takes questions from reporters during his ‘Made In America’ product showcase at the White House July 15, 2019 in Washington, DC. Trump talked with American business owners during the 3rd annual showcase, one day after Tweeting that four Democratic congresswomen of color should go back to their own countries. (Photo by Chip Somodevilla/Getty Images)

In 1981 Lee Atwater, the famed Republican political operative, explained to an interviewer how his party had learned to exploit racial antagonism using dog whistles. “You start out in 1954 by saying ‘Nigger, nigger, nigger.’” But by the late 1960s, “that hurts you, backfires. So you say stuff like, uh, ‘forced busing,’ ‘states’ rights,’ and all that stuff, and you’re getting so abstract. Now, you’re talking about cutting taxes, and all these things you’re talking about are totally economic things and a byproduct of them is, blacks get hurt worse than whites.”

Well, the dog whistle days are over. Republicans are pretty much back to saying “Nigger, nigger, nigger.”

As everyone knows, on Sunday Donald Trump attacked four progressive members of Congress, saying that they should “go back and help fix the totally broken and crime infested places from which they came.” As it happens, three of the four were born in the US, and the fourth is a duly naturalized citizen. All are, however, women of colour.

Sorry, there’s no way to both sides this, or claim that Trump didn’t say what he said. This is racism, plain and simple — nothing abstract about it. And Trump obviously isn’t worried that it will backfire.

This should be a moment of truth for anyone who describes Trump as a “populist” or asserts that his support is based on “economic anxiety.” He’s not a populist, he’s a white supremacist. His support rests not on economic anxiety, but on racism.

And since we’re having this moment of clarity, there are several other points we should address.

First, this isn’t just about Trump; it’s about his whole party.

I don’t just mean the almost complete absence of condemnation of Trump’s racism on the part of prominent Republicans, although this cowardice was utterly predictable. I mean that Trump isn’t alone in deciding that this is a good time to bring raw racism out of the closet.

Last week Bill Lee, the Republican governor of Tennessee, signed a proclamation ordering a day to honour the Confederate Gen Nathan Bedford Forrest, whom he described as a “recognised military figure.” Indeed, Forrest was a talented military commander. He was also a traitor, a war criminal who massacred African-American prisoners, and a terrorist who helped found the Ku Klux Klan.

Put it this way: The Nazis had some very good generals, too. But the world would be horrified if Germany announced plans to start celebrating Erich von Manstein Day. There are, no doubt, some Germans who would like to honor Nazi heroes. But they aren’t in positions of power; their American counterparts are.

Second, although most of the commentary focuses on Trump’s demand that native-born Americans “go back” to their home countries, his description of their imaginary homelands as “crime infested” deserves some attention, too. For his fixation on crime is another manifestation of his racism.

I’m not sure how many people remember Trump’s inaugural address, which was all about “American carnage” — an alleged epidemic of violent crime sweeping our nation’s cities. He didn’t explicitly say, but clearly implied, that this supposed crime wave was being perpetrated by people with dark skins. And, of course, both Trump and the Trumpist media go on all the time about immigrant criminality.

In reality, violent crime in America’s big cities is near historical lows, and all the available evidence suggests that immigrants are, if anything, less likely than the native-born to commit crimes. But the association between nonwhites and crime is a deeply held tenet among white racists, and no amount of evidence will shake their belief.

Oh, and the real “American carnage” is the surge in “deaths of despair” from drugs, suicide and alcohol among less-educated whites. But this doesn’t fit the racist narrative.

Finally, the GOP’s new comfort level with open racism should serve as a wake-up call to Democrats, both centrists and progressives, who sometimes seem to forget who and what they’re confronting.

On one side, Joe Biden’s celebration of the good relations he used to have with segregationist senators sounds even more tone-deaf than it did a month ago. Biden clearly isn’t a racist, but he needs to get a clue about how important it is to confront the racism sweeping the GOP.

On the other side, Democrats need to be very careful about doing anything that even hints at playing the race card against their own party. I understand progressive frustration over Nancy Pelosi’s caution and exasperation at moderate Democrats who may be causing that caution; many of us share their frustration. But there’s no equivalence between even the most foot-dragging Democrats and the GOP’s raw racial incitement, and anyone who suggests otherwise is acting destructively.

It’s tempting to say that Republican claims to support racial equality were always hypocritical; it’s even tempting to welcome the move from dog whistles to open racism. But if hypocrisy is the tribute vice pays to virtue, what we’re seeing now is a party that no longer feels the need to pay that tribute. And that’s deeply frightening.