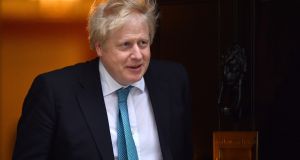 When outlining the UK’s negotiating position for its trade talks with the EU, British prime minister Boris Johnson said the UK would be prepared to walk away from the talks in June if it felt enough progress was not being made. Photograph: Leon Neal/Getty Images

The mood music ahead of the start of the Brexit trade talks next Monday is not good. When outlining his country’s negotiating position, British prime minister Boris Johnson said the United Kingdom would be prepared to walk away from the talks in June if it felt not enough progress was being made.

There is a clear gap to be bridged on the terms on which the European Union is prepared to do a free trade deal with the UK and whether Johnson’s government will sign up to these. It may well be some time before it is clear whether a deal can be done.

Much of what we are seeing now may be position-taking ahead of the talks. The EU, under pressure in particular from France, has toughened up the demands it will make of the UK. The latter, for its part, is insisting that it must escape regulations set in Brussels and the oversight of the EU courts.

So the outcome of these talks remains unpredictable and failure to strike a deal is possible. An agreement would require compromises from both sides. But it is important to recognise that it is possible, provided the UK is willing to sign up to commitments in regard to environmental and workers’ standards and state aid to businesses. Given the political will – on both sides – a deal can be done.

If progress is not made on checks for the North, the whole EU/UK talks could be imperilled

The price of failure in the talks would be significant, with the UK crashing out of the EU trading regime at the end of the year and the immediate imposition of tariffs and controls on trade. Despite this, Johnson insists that the UK will not seek an extension to the negotiating deadline; as a result, we may end up in the autumn with more last-minute talks and another looming Brexit cliff-edge.

The outcome of the negotiations is clearly important for Ireland, with a number of key sectors, notably food, reliant on the UK market and exposed if the talks do fail. The type of deal being sought by the UK means there will be costs for Irish trading businesses no matter what the conclusion. But if the talks collapse then these costs will be significantly higher.

Whichever parties form the next government here will also be acutely aware that the implementation of the new trading arrangements for Northern Ireland need to be agreed and a new system put in place by the end of the year. The UK government has cast doubt on its commitment to these checks, which were agreed in principle in the withdrawal agreement.

Indeed, if progress is not made here, the whole EU/UK talks could be imperilled. While the outgoing Government may have hoped the Border issue had been put to bed earlier in the talks, putting flesh on the bones of what was agreed – a vital strategic issue for Ireland – remains a central part of the Brexit process.

1 Ireland could lose out as France lays claim to most of €5bn Brexit compensation fund
2 Ranelagh’s brand new street with three-beds from €1.325m
3 Miriam Lord: The Dáil's answer to John Wayne overcooks the ham slice, by slice, by slice
4 Breakfast in Ballsbridge: When Audrey Hepburn met her dad in Dublin
5 Newton Emerson: Joe Biden’s Brexit remarks show an opportunity for unionism
Real news has value SUBSCRIBE