What elements of Britishness would be incorporated into a united Ireland? 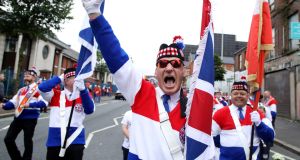 It can be debated whether it is helpful to be talking now about a future united Ireland.

However, when such a central figure in Ulster unionism as Peter Robinson says it must be discussed – whilst being very clear that this is not something he would support – such views must be listened to. What is clearly unhelpful is loose talk about Border polls and other issues without setting them in the wider context.

Of equal importance to the various theoretical outcomes is how we can make Northern Ireland really work for all its people. The Belfast Agreement has rightly been praised for what it achieved. However, it is clear that the goals of mutual respect and reconciliation did not happen.

It has been said that part of the agreement’s strength was its ambiguity – it was not over-prescriptive. Two competing traditions had largely been in their bunkers. Getting them out of the bunkers and engaging was a great achievement in itself.

A key objective was to keep them out and keep engaging. Avoid issues that will move people backward. Let mutual respect and understanding grow, with generous leaders driving it.

Ironically, a Northern Ireland with genuine reconciliation is a prerequisite for the ambitions of both traditions. For one, a Northern Ireland in the UK at peace with itself, and which enjoys a much greater affinity with and interest from the rest of the UK, is very different to what exists today.

On the other hand, a reconciled North that works and could peacefully be accommodated in a wider united Ireland is possibly the only condition in which the Republic would take Northern Ireland on. Without reconciliation and mutual understanding neither objective can be successfully achieved.

Whatever about its rights and wrongs, Brexit has had a polarising effect, particularly for nationalists . It is seen as clearly distancing them from the Republic and is optically unhelpful in being seen as being “imposed by England” (as opposed to by the UK).

For those who have problems with Ireland’s Call, wait until we get on to the real issues

Ironically, Life and Times Surveys had been increasingly showing Catholics as being less attracted by a united Ireland, and the emergence of a “Northern Irish” identity.

There has been little sign of mutual respect and understanding seen lately at a political level, although there are many civic initiatives, especially from younger people. We saw one such group come out of our British-Irish Association conference that has led to a number of impressive initiatives.

A key issue relating to mutual respect is: what elements of Britishness would be incorporated into any united Ireland? The familiar words of Belfast poet John Hewitt, who described his entire identity as Ulster-based, Irish, British and in a vaguer sense European, are relevant here.

The history we learn at school in the Republic is the journey – with all its ups and downs – to be an independent, ie non-British, state. Do we in the Republic really understand what it means to be both Irish and British? Progress has been made but only to a point.

What would we give up? Easy things like recognising the Twelfth of July (peacefully celebrated) and the importance of the Somme? What element of Government would be in Belfast? How would our Constitution be altered and what role would the British government have as a form of guarantor for unionists? Would we pay taxes to fund the NHS-type system that exists in the North now and the wider shortfall from Westminster? Would we rejoin the Commonwealth?

Those who promote a united Ireland expect the unionists to give up so much. Every start of the rugby season we get the familiar complaints about having Ireland’s Call as an anthem for the Ireland team as opposed to Amhrán na BhFiann.

That misses the essential point that the Irish rugby team is not that of the Republic but that of the entire island, with all its diversity and richness. For those who have problems with Ireland’s Call, wait until we get on to the real issues.

I don’t pretend for a moment that this is easy. But I have seen the best of the different traditions in that shared piece of this island. There is a big prize to play for.

Hugo MacNeill is the chairman of the British-Irish Association