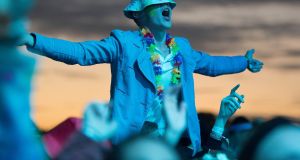 Fans in the crowd for Kodaline on the main stage at Electric Picnic. Photograph: Dave Meehan

This year’s Electric Picnic was hugely enjoyable. The capacity was increased close to 60,000, but so too had the size of the site, including a new area, Freetown which featured a massive dance tent and a Latin America-themed set.

There was a large, but relatively unobtrusive, Garda presence on site and on the periphery, guiding traffic with aplomb.The food was decent, the toilets were plentiful, the crowd was pleasant, it felt impossible to be bored, the festival maintained a sense of late night exploration, and the weather held up as much as can be expected, which, as we know, is always the making of an outdoor event in Ireland.

Festivals ebb and flow. They lose some elements and gain others. But what has been a steady trend in Electric Picnic’s development is the increasing dominance of branding at the festival. This is where the Picnic, Ireland’s most successful contemporary music festival, is failing, and failing badly. Festivals are flypaper for brand money, but unless these brands and the agencies that enact their plans begin to offer a gesture of sophistication or demonstrate a degree of restraint, the festival will become an almost intolerable experience.

Most incongruous was AIB’s bizarre presence at the festival, although I suppose nothing says reckless hedonism like an Irish bank

There are multiple things at play that allow this kind of brand pollution. There is the sledgehammer “just make the logo bigger” approach to brand presence that clients demand and view visual dominance as victory. There is clearly a lack of imagination amongst agencies carrying out these tasks. There is poor design. There is the pandering to so-called influencers that creates a feedback loop of basicness. And there is the free reign that the festival organisers have given brands to erect their logo’d Stonehenges.

Brands and agencies need to realise that less is more, and that their mission would be far more successful if their approach was more subtle. With so much money swimming in BrandLand, why are they doing things so badly?

The main arena at Electric Picnic has morphed into an unpleasant mall, where brands and signage compete for attention in the most aggressive, annoying ways possible. Nowhere was this more pronounced (and there were so many examples to choose from) than the warring neighbours of Today FM and Just Eat. The latter offered a garish picnic area plastered in branding with music drowning out your thoughts as you ate, evoking the 00s-era super-pub maxim that louder was better. Today FM bashed out a mostly torrid playlist all weekend to an often empty yard in an area reminiscent of the unnecessarily large entrance awnings of mid-size American motels.

Heineken is consistently one of the worst offenders at festivals and outdoor gigs, plastering its brand name over bars with the biggest, ugliest signs imaginable. The visual impact is akin to an aural one of the volume being up to loud, the brand blaring every time you approach a bar.

There was at least a “story” running through the mobile phone networks Three’s presence at the festival. The company had commissioned musical collaborations between interesting acts, also staged at the festival, so at least some art is emerging from their efforts.

Most incongruous was AIB’s bizarre presence at the festival, although I suppose nothing says reckless hedonism like an Irish bank.

The modus operandi of many agencies these days seems to simply be about getting on the feeds of various influencers, which is hardly a difficult task considering the purpose of influencers is to make money from agencies and PR companies by turning their personalities into ad platforms, thus removing any sense of actual taste or integrity. That’s not the fault of influencers, they’re just making money and taking advantage of this climate. But for everyone else, at some point agencies are going to have to move beyond the idea that someone posting about something is a “mission complete” moment for said brand or campaign. This approach has fostered laziness and a complete lack of imagination.

At Glastonbury, the best music festival in the world, branding is kept to a minimum. Bars have their own names and identities and there is little signage beyond the very dominant charity branding of Oxfam, Greenpeace, and Water Aid. Other festivals are beyond parody when it comes to branding, particularly the American behemoth of South by Southwest (where I once saw a band perform inside a giant Doritos vending machine) and Coachella’s wristband caste system.

But surely Electric Picnic can do better. While agencies and clients may toast their success at a festival based on the biggest “presence”, largest logo, and most obtrusive visual display, the audience deserves a lot more. The branding binge is detracting from the festival overall, and is embarrassingly blatant. If you’re going to plunge people into a branded environment, at least make it interesting.