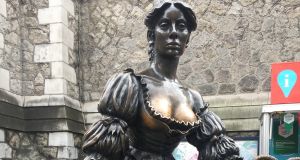 Molly Malone has put in a busy tourist season – you can see it in the shine on her breasts. When the sun strikes them as they spill out of her frilly-edged low-cut top, they can be seen from a distance, rubbed to a bright gold against the dull ageing bronze patina of the rest of her. It’s a peculiar sight. How she got that way is clear after only a few minutes standing by her statue on Suffolk Street. “It’s a tradition among Dubliners to rub her breasts,” says the tour guide to the 12 or 14 tourists gathered around on this the final stop of their walking tour. “It’ll bring you luck.”

The tradition is news to this Dubliner who has always assumed the general consensus locally is that the statue is a kitsch tourist magnet and can’t fathom on any level the touching of this “bosomy version of Molly” – as The Irish Times called it in a sniffy piece in 1989 when she was fresh from the foundry.

Many of the city’s vast choice of walking tours begin and end at this point. It’s central and tourists want to see the statue of Dublin’s most sung-about citizen who wheeled her wheelbarrow through streets broad and narrow.

It’s in all the guidebooks, rated on TripAdvisor “don’t forget to rub her boobs” and “great place for a cheeky picture”.

The young guide’s tour is the pay-if-you-like-it type and his audience line up to press notes into his hand before making it over to Molly. A group of middle-aged Spanish-speaking men are already there, each taking it in turns to hop up on the low granite plinth to cup Molly’s breast while a friend captures the moment – although why anyone would want to see the photo is a puzzle: “And here’s me in Dublin on a sunny day in September, feeling up a bronze statue of a woman.”

Another tour guide, whose walkers prepay, has just finished his tour, a €20 tip tight in his hand. He had given them the spiel about the breast rubbing as a sign-off on his tour. “Certain parts of her have been exaggerated,” he told his walkers coyly, though there’s no mystery which parts he means. “It’s generally believed that it brings good luck.” Two young German women look on mystified. They had heard about the luck thing but rubbing a statue’s breasts? They can’t understand it.

When did this tradition start? The Molly Malone statue first appeared on the streets in 1988 as part of the millennium celebrations, made by sculpture Jeanne Rynhart from a commission by tourist industry veteran Matt McNulty who went on to be director general of Bord Fáilte.

But why stop at Molly Malone? The following year he rolled out plans for a sculpture trail in the city. The idea was to commission from Rynhart 12 more street sculptures of famous literary types, Yeats, Wilde and the like.

It prompted a quick and very negative response from several quarters, often on the letters page of this newspaper. Adrian Munnelly, director of the Arts Council in his capacity as registrar of Aosdána, wrote to Bord Fáilte expressing his members’ “universal depreciation” of the Molly Malone statue, declaring it to be “entirely deficient in artistic point and merit”. Lord Mayor Ben Briscoe jumped in to defend Molly, saying “the statue was regarded with great warmth and affection by city of Dublin”.

Such was the level of the debate brought on by the promise (or threat depending on your point of view) of 12 more Molly-type statues that Rynhart, who in a letter published 30 years ago this October defended her work, saying that Molly’s clothes were consistent with the dress of a 17th-century street hawker.

“Female costume of that era, she wrote, consisted of a full length chemise, an over skirt and basque of wool”, adding that nobody then would have been shocked to see breasts, as all mothers breastfed. “It would be erroneous of us to judge Molly by our present-day morals and values. She was a Restoration citizen.”

We do know that the “tradition” of rubbing her breasts began sometime before 2014. Her original location was at the bottom of Grafton Street but she was then moved to Suffolk Street to facilitate the Luas works. Moving her revealed some cracks so some restoration was required.

The repairs were carried out by Bushy Park Ironworks whose Edward Bisgood told the Irish Times: “We are carrying out some patination to bring her back to her original dark brown colour, but we are leaving the areas where she’s been rubbed over the years, so she will look as people remember her, but she’ll be a lot stronger.”

She’ll need to be.