We have reached a ‘point of truth’ regarding the Defence Forces 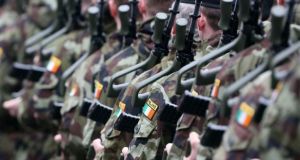 The Defence Forces has been the lowest paid public sector organisation for many years, while remaining, ironically the most trusted. Photograph: Colin Keegan/Collins Dublin

That Óglaigh na hÉireann continues to deliver on its roles and responsibilities as laid down in the White Paper on Defence in a professional and dedicated manner is tribute to the men and women in our ranks.

We do it in spite of reduced strength and less favourable conditions of service in comparison to the rest of the public sector. Regrettably, some cracks are beginning to appear, manifested in the tying up of two of our Naval vessels as a result of crew shortages, and the reduction in the vital emergency aeromedical service due to a lack of pilots.

Many of our other bespoke services such as explosive ordnance disposal and certain armed guard services are only being maintained through the goodwill of our people, and in flagrant breach of EU working time directive health and safety legislation.

The Defence Forces has been the lowest paid public sector organisation for many years, while remaining, ironically the most trusted. What keeps us at the top of this “trust tree”? Our unwavering commitment to the State and its citizens, our unique ethos and values system, and our refusal to take industrial action must have something to do with it.

However, there is a real concern that the retention crisis in the Defence Forces is chipping away at our values. Certainly, the recent narrative in the media has had both a positive and somewhat negative effect on the institution and those who serve. There is now a general acceptance and awareness across Irish society that Defence Forces personnel are underappreciated and undervalued. Unfortunately, the many exciting, rewarding and fulfilling aspects of a career in Óglaigh na hÉireann can get drowned out by the often-public exposure of the failure to ensure the most basic conditions of service necessary to retain our talent.

There are so many simple measures that can be taken to reinforce the Defence Forces as an employer of choice and an attractive career. A first step towards safeguarding the interests of our members would be the conclusion, without further delay, of the saga that is the review of the Defence Forces Conciliation and Arbitration (C&A) Scheme. The reason for the delay in appointing the promised independent chair is a mystery, and does not inspire confidence, over a year after the publication of the C&A review.

Although some might describe the focus on turnover rates as “unhealthy”, what they surely mean is “uncomfortable”. The fact remains that the turnover rate remains unsustainably high, and our strength continues to drop. What is “unhealthy” is the continued prioritisation of recruitment over retention, which has not served us well. It has been clearly demonstrated that at the current, persistent cycle we are never getting back to our required strength of 9,500 personnel without immediate, tangible retention initiatives.

The acceptance by the representative associations of the initial long-awaited recommendations of the Public Service Pay Commission was a first step towards solving the crisis in the Defence Forces. It was the pragmatic, responsible thing to do, and paves the way for further improvements through the Government’s High Level Implementation Plan, “Strengthening our Defence Forces”.

The Department of the Taoiseach has assumed control and oversight over this plan to save the Defence Forces, and repeated commitments have been made that it will be adhered to. Some of the projects contained in the plan are significantly behind schedule, and much work will have to be done to ensure that the efforts made to date by management and the representative associations in making the case for improved conditions of service are not squandered. The timelines are clear, as are the potential benefits.

The clear intent of departmental colleagues to fold most reviews and finished product into negotiations at the next public sector pay talks, whenever they may occur may not serve the Defence Forces well. The Representative Association of Commissioned Officers (RACO) has made fully costed, feasible and impactful submissions to the management side and hopes that they will take on board and propose these submissions for Government implementation without undue delay.

As we have consistently stated, the success or failure of the Government plan will be reflected in the strength of the Defence Forces month by month. Regrettably, the organisation is on track to reduce in strength by a further 200 personnel in 2019, despite the recruitment drive. With 650 personnel in full-time induction training, the real deployable strength of the Defence Forces is closer to 8,000. It is little wonder that our members are under pressure.

There is a genuine feeling within the membership that we have reached a “point of truth” regarding the Defence Forces, and that there is a greater awareness than ever among both our parliamentarians and fellow citizens of the dedication and also the needless hardship being endured by our people.

I firmly believe that we have the solutions within our grasp to solve the retention crisis and restore this proud organisation to full health, but only if the political will exists for the plan to deliver on its ambitions. If it is rolled into pay talks then there is a fear, based on bitter experience, that the Defence Forces will be once more at the back of the queue. The clamour for a separate model of pay determination and a commission on the future of Defence will then inevitably grow ever greater. Let’s hope that 2020 is the year that Government finally addresses the retention crisis in our ranks, and really strengthens our Defence Forces.