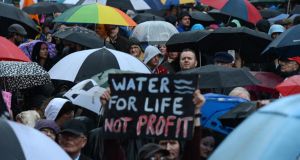 “An early election . . . would quickly become focused on whether the bulk of the Irish electorate wants to continue down the populist route or vote for parties who are serious about government.” Photograph: Cyril Byrne

The contortions the political system has got itself into in recent days over charging for water is the clearest sign yet that the 32nd Dáil is incapable of functioning in any sort of coherent fashion.

The water debacle raises serious questions about whether the ramshackle edifice established by the “new politics” can survive even one more budget.

The issue has now gone beyond whether householders are, or are not, charged for water but whether the Dáil is capable of making coherent decisions that comply with the law.

Up to last weekend the indications were that the Oireachtas committee established to examine the future funding of water was prepared to sign off on a report that would have been bad for the environment and in breach of European law.

It appeared as if Fine Gael had allowed itself to be browbeaten by Fianna Fáil and the hard left into agreeing to what it knows to be a flawed system that is certain to cost the country dear in the years ahead.

It seemed Fine Gael was so desperate to get the issue off the political agenda and remain in power that it was prepared to agree to a draft report that would have effectively ended the concept of charging householders for water.

Labour TD and former Minister for the Environment Alan Kelly summed up the situation by saying that the committee’s plan was simply illegal, as it did not meet either the polluter-pays or the cost-recovery principles which form the basis of the European Union water directive.

Since then there has been a change of heart by Fine Gael members of the committee who seem to have developed a bit of backbone. While the tougher line has turned the committee’s deliberations into a shambles this is no bad thing as it exposes the absurdity of the draft report.

Fine Gael, Labour and Green Party TDs who are committed to some form of charging for excessive use of water may be in a minority that is no reason for them to sign up to a deeply flawed report.

All such a report would achieve would be to give respectability to a patently illegal course of action. That has an obvious appeal to the bulk of the Opposition but there is no reason why Fine Gael TDs should indulge it.

Fine Gael may have a lot to gain by standing up for the law-abiding citizens who paid their charges, rather than indulging the minority who refuse to pay

Ultimately the Government has the responsibility for legislating on the issue and it will have to decide whether do the right thing by the country or take the politically expedient option. While it would seem absurd for the Government to collapse over water it is not outside the bounds of possibility.

The conventional view in the political world is that Fine Gael has most to lose in this scenario. This view has encouraged those in the party who want to get the issue off the political agenda regardless of the consequences to accept a bad deal in preference to no deal.

However, there is a strong argument that the exact opposite is the case. Fine Gael may actually have a lot to gain by standing up for the law-abiding citizens who paid their charges, rather than indulging the minority who refuse to pay.

The same is true for the Labour Party. Kelly has taken a strong and courageous line on the issue. He has given his party credibility in contrast with some of his colleagues who have reverted to Opposition rhetoric as if they were never in government.

For Fianna Fáil an early election precipitated by the party’s stance on water might not go nearly as well as some of its leading lights believe. By siding with Sinn Féin and the Trotskyists it has forfeited much of the credit it earned with middle Ireland by facilitating the formation of a government last year.

Barry Cowen was probably right to suggest that the imminent Fine Gael leadership election is feeding into that party’s new tough line, with the leading candidates, Simon Coveney and Leo Varadkar, now vying with each not to concede too much on water.

An early election could be the best thing that happens to whichever of them wins. It might be precipitated by water but it would quickly become focused on whether the bulk of the Irish electorate wants to continue down the populist route or vote for parties who are serious about government.

Historically Fine Gael has defied expectations and done best, as in the two elections of 1982, when it took a strong and initially unpopular line that was in the national interest.

It is become more and more obvious as each day passes that the current Dáil is unworkable. The fact that the minority Government does not have the power to order the business of the House has seen a succession of defeats on a variety of issues.

Last week’s defeat on a plan to streamline the structure of the citizens’ information and money advice services was a classic example of how even mundane administrative reforms have now become impossible if there is a hint of opposition from any quarter.

Water may be the issue to bring the house down but only because the foundations have already started to crumble.