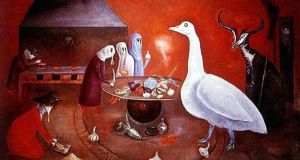 There can’t have been many famous surrealist paintings set in Moate, a town probably more associated with another branch of the arts, country and western music.

But I know of at least one.

It’s called Grandma Moorhead’s Aromatic Kitchen. And the matriarch in question was indeed from Moate, although how much the scene borrows from any actual kitchen there is debatable.

As with all her paintings, this one was set mainly in the head of its creator, Anglo-Mexican artist Leonora Carrington, the kitchen-owner’s granddaughter, who was born 100 years ago today.

In any case, the picture is a useful introduction to Carrington’s genre. A long-time friend and patron, the collector Edward James, once said that her work wasn’t so much painted as “brewed [...] in a cauldron at the stroke of midnight”. And sure enough, against the backdrop of what might be a Stanley range, the kitchen painting features cloaked female figures working alchemy on a table within a magic circle, protected by garlic bulbs, while a giant goose towers over them.

Not the least interesting thing about the picture is that it dates from 1975, after Carrington had spent almost 40 years in exile from her native England, never mind the Ireland that she seems to have known mainly, if not only, through the folk tales with which her “nanny” once filled her childish head.

Like Grandma Moorhead, Carrington’s mother was from Westmeath too. But after a society marriage in 1907 to the wealthy Harold Carrington, she moved to a stately home in Lancashire, and seems to have taken to that station with great enthusiasm.

By Leonora’s account, both her parents were social climbers, who revelled in invitations to Buckingham Palace and the royal enclosure at Ascot.

In their daughter’s imagination, however, the family were instead social descenders, having originated (so her grandmother claimed) among the Tuatha de Danann.

As Horslips fans will know, these were a mythical race of magicians who in prehistoric times, invaded Ireland by boat, but somehow landed on a mountain top, where they then burned their transport to make retreat impossible.

They ruled the country for a time until defeated by another wave of incomers, the Milesians, leading after a peace settlement to the original partition of Ireland, in which the Milesians secured the overground half while the Tuatha went subterranean, as fairies. In the Irish vernacular, Carrington was perhaps often “away with the fairies”, as in her 1954 painting Sidhe: the White People of the Tuatha de Danann, which depicts another assembly of alchemists around a table, with more fowl play in the form of a hen.

But she had real, and well-documented, mental health problems too. They came to a crisis during  the second World War, just before which she had been living in Paris, with the painter Max Ernst, who was considered “degenerate” by the Nazis.

The couple were forced to flee the occupation, but in opposite directions – he to the US, she to Spain. In the process she suffered a major breakdown, was hospitalised for three years, and treated with dubious drugs, at least one of them subsequently banned.

Escaping that, and Europe in general, she found refuge in Mexico, a country that became a spiritual and actual homeland for the rest of her life.

Thereafter, Mayan folk beliefs mingled with her inherited Celtic ones in a heady concoction that turned her into one of her adopted country’s most famous artists long before she died, in 2011, aged 94.

She had been long forgotten by her mother country, and even by her father one. But her declining years saw a revival of interest in Britain, and in 2013 the Irish Museum of Modern Art also unveiled a major posthumous exhibition of her work (albeit one that did not include Grandma Moorhead’s Kitchen).

If her country had forgotten her eventually, the feeling seems to have been mutual.

She left England in 1937, the year of three kings.

Seventy-two years later, interviewed in Mexico by the London Independent, she inquired (with apparent sincerity) as to who was on the throne now. ”Elizabeth?” the paper reported her responding. “She must be quite new.”

Today’s centenary will be marked by a day-long conference in Mexico City. And while there is nothing overtly Irish among the talk titles, they do include one on “The Chtonic Realms of Leonora Carrington”. “Chtonic” means “subterranean”, more or less.

So Ireland’s little people, her ancestors or otherwise, will likely get a mention.

1 Three relatives dead after apparent murder-suicide in Kanturk, Co Cork
2 Don McLean: ‘My ex-wife is the worst person I ever knew’
3 Gardaí say 52 people who went missing in 2020 not yet found
4 Almost 20% of staff at Dublin hospital have antibody evidence of Covid-19 infection
5 Woman stranded in Ireland due to pandemic has ‘miracle baby’
Real news has value SUBSCRIBE