Washington needs to get more involved in Brexit 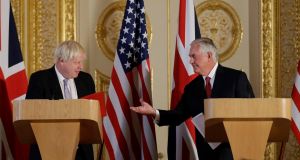 British foreign minister Boris Johnson with US secretary of state Rex Tillerson who has been sent a bipartisan letter from Congress urging him not to eliminate the position of Special Envoy to Northern Ireland. Photograph: Matt Dunham/AFP/Getty Images

Next year marks the 20th anniversary of the Belfast Agreement, the international peace accord that changed the course of Irish history. After decades of violence, a seemingly intractable conflict came to end, and a three strand framework for a peaceful and more prosperous future was put to the electorate in 1998. In an unprecedented referendum, the Irish people voted overwhelmingly to ratify the deal which included provisions for powersharing, all-Ireland institutions and cross-Border co-operation.

A “truly historic opportunity for a new beginning” had arrived, to quote the agreement. Two decades later, the peace process remains a work in progress. It needs continued support from Dublin, London and Washington. The North’s political parties need to restore its devolved institutions as soon as possible.

However, by any objective standard, the post-Belfast Agreement era has been one of great progress, and the end of a physical border on the island of Ireland might be one of its most significant byproducts.

I raise the issue of the Border to highlight its importance and share a personal anecdote. Twenty-eight years ago, I was on a bus with then US speaker of the house Tom Foley and a congressional delegation travelling from Donegal to Derry. In what seems unthinkable today, the vehicle was stopped by heavily armed British soldiers and thoroughly searched. It was an intimidating and inconvenient experience that my colleagues and I will never forget.

Thankfully, the days of watchtowers, checkpoints and road blocks are over. The 30,000 British troops once deployed in the region have gone. Now, thousands of people cross the 310-mile Border every day without incident. According to the Centre for Cross Border Studies, 14 million cars travel between Dundalk and Newry every year. There is free movement of goods and services.

A simple switch of mobile phone service provider is sometimes the only way to know you have crossed from one jurisdiction to the next.

Since 1998, the Border has been both frictionless and invisible.

When 30 million residents of the United Kingdom went to the polls 15 months ago and decided to leave the European Union, chances are they were not thinking about Ireland. Immigration, economics and identity were some of the issues most commonly associated with Nigel Farage and the Brexiteers. But the stunning decision to divorce from Europe after 40 years has put the future of the Border back at risk.

The wishes of a majority in the North to remain in the EU brings added complexity to the equation. British prime minister Theresa May has triggered article 50 of the Lisbon Treaty, officially starting the two-year legal process of Britain’s withdrawal from the bloc. Because no member state has ever tried to leave the EU, the initial Brexit discussions have led to confusion and uncertainty. A growing chorus of observers on both sides of the Atlantic describe the talks as “shambolic”.

Crucial issues such as Britain’s future arrangements with the customs union and single market remain unresolved.

Even the EU’s chief negotiator Michael Barnier has expressed his frustration publicly saying “at this current state of progress we are quite far from being able to say that sufficient progress is taking place.” The deadline to leave is March 29th, 2019.

Last month, despite pledging to keep the Border as seamless as possible, May suggested that the implementation of recently developed technologies might be sufficient to police the frontier. Her call for an “unprecedented solution” to the Border issue was long on aspiration but short on detail. Most security experts immediately rejected the “soft” Border proposal as unworkable and impracticable. EU officials went even further denouncing the British government’s calls for flexibility and imagination as “wishful thinking”.

A return to the bad old days of bus searches, harassment and partition is simply out of the question

The Minister for Foreign Affairs Simon Coveney was correct when he said “any barrier or border on the island of Ireland in my view risks undermining a very hard-won peace process.” I intend to raise this issue with him directly when he visits Washington next month. At the end of the day, if the UK sticks to its plan to leave the customs union and single market they need to be more specific on how a hard Border can be avoided and not leave it up to Dublin and Brussels.

I also believe the United States could have a stronger voice in this process. After all, nearly 40 million Americans are of Irish decent. That is why I co-authored a bipartisan letter to US secretary of state Rex Tillerson this week urging him not to eliminate the position of Special Envoy to Northern Ireland. Both the Irish and British governments agree that the role the United States played in the peace process was indispensable. And I believe we can make a meaningful contribution in this debate.

As co-chairman of the Friends of Ireland caucus in Congress, I will continue to oppose any return to a hard Border and work with my colleagues to protect the progress achieved through the Belfast Agreement. After all that has been accomplished in the past 20 years, we need to prevent the critics from reinforcing the notion that the island is once again divided.

A return to the bad old days of bus searches, harassment and partition is simply out of the question.

1 Connell losing touch with the club championship is the real tragedy of Normal People
2 SpaceX and Nasa successfully launch astronauts into orbit
3 Coronavirus: Nine more deaths reported in the Republic
4 We need to pay very close attention to what is happening in Britain now
5 Irish tourists excluded from visiting Greece as country begins its tourism season
Real news has value SUBSCRIBE