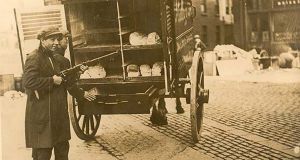 A bread cart with armed fighters in the Irish Civil War, around 1922: We can never know for sure if Protestants were targeted out of pure religious hatred or selected as convenient symbols of the old coloniser, Britain. Photograph: National Library of Ireland

A fundamental question about the Revolution’s civilian casualties was reopened at the West Cork History Festival last month: were Protestants harmed because they were Protestants or were they targeted as part of a non-sectarian campaign that also included “loyal” Catholics?

Evidence from the Civil War suggests that while the religious minority faced some prejudice in the early Free State, Catholics, including ex-servicemen and Royal Irish Constabulary personnel, also suffered for their perceived connection to Britain.

As pro- and anti-treaty forces clashed over the terms of the 1922 independence settlement, local communities drove out representatives of the old regime – in attacks that sometimes also aimed to seize property, including land.

In terms of violence reported to British and Irish compensation bodies after independence, 19 per cent of arson attacks in counties Limerick, Tipperary, and Waterford, for example, were attributable to the victim’s “allegiance to the United Kingdom”. And a quarter of buildings burned in these counties, during 1922-1923, were “big houses”, that is, the usually Protestant-owned mansions built during historic English conquests.

In archives uncovered only in recent years, there are also many personal stories to corroborate official figures on loss and hardship. First broadcast in 2012, Eoghan Harris’s An Tost Fada, for example, documents the persecution of one Church of Ireland family. Allegedly threatened by the Irish Republican Army (IRA), in April 1922, clergyman George Salter’s father gave up his farm in Dunmanway – a west Cork town made infamous by the Bandon Valley Massacre that same month – and moved to the UK for three years before, in this case, returning to a different part of the county.

Recent controversy over the film lies not in An Tost Fada’s acknowledgment of Protestant depopulation during the Revolution. It’s obvious that many more Protestants than Catholics died or departed Ireland during these turbulent years; between the 1911 and 1926 censuses, the number of Anglicans, Presbyterians, Methodists, and Baptists, in the 26 counties that became the Free State, fell by 33 per cent, compared with a total population decline of 5 per cent. The Protestant population of Munster dropped particularly sharply – by 45 per cent.

The problem is there’s little agreement, in public or academia, on the exact timing of and reasons for the change. For one, there’s a lack of evidence: the 1921 census was cancelled because of the war.

The topic also hits a much deeper nerve, as it questions the basic character of the independence struggle. Moral campaign of Irish militants against British oppressors? Or, bitter, sectarian conflict over religion, politics, and land? Neither characterisation is wholly accurate, of course, but evidence of minority flight from Ireland – and civilian casualties generally – raises difficult questions for historians to answer.

Historians have identified various factors that explain the reduction of the non-Catholic population in the Free State, by between 90,000 and 104,000, during 1911-1926. Economic and voluntary migration, the withdrawal from Ireland of the British administration and armed forces, and death during the first World War contributed much more significantly to the decline than did IRA attacks; Andy Bielenberg of UCC calculates a “residual range” of between 2,000 and 16,000 Protestants who were probably forced out of Ireland.

To contextualise the Protestant “exodus” isn’t to belittle the harrowing experiences of civilians driven from their livelihoods by threats and physical harm. However, new research on revolutionary fatalities is vital in confirming that attacks on Protestants didn’t constitute systematic violence; the Free State didn’t sanction a “cleansing” of Protestants akin to the mass killing of ethnic outgroups seen in Europe at this time. And Protestants at a Nenagh (Tipperary) town meeting, during the Civil War, agreed they had “less to grieve about”, living under Dublin rule, than did Catholics facing state discrimination and loyalist police and paramilitary brutality in newly partitioned Northern Ireland.

Southern Protestant experience of the revolution also varied according to geography and relative urbanisation. The heinous Dunmanway killings, for example, weren’t representative of inter-denominational relations across the country – nor even the county.

David Fitzpatrick of TCD has shown that IRA terror “lacked the power to break the spirit” of west Cork’s Methodist communities, while a sizeable working-class Protestant population in Cork city might explain heightened sectarian tensions reported there.

We can never know for sure if Protestants were targeted out of pure religious hatred or – as descendants of the Planters – selected as convenient symbols of the old coloniser, Britain. However, according to the Civil War’s complex identity politics, persons of dubious allegiance in the Free State included not just the religious minority, but also Catholic loyalists and middle-class farmers. “Graziers” of large pastures were, arguably, more vulnerable than were the dwindling Protestant gentry to cattle driving and crop burning (which accounted for 41 per cent and 45 per cent of reported arson attacks in civil war Limerick and Tipperary).

While it’s right to break the “silence” on the cruelty of the revolution for many non-Catholics in the south, it’s also important to remember that loyalism isn’t synonymous with Protestantism: as insurgents sought to establish independence from Britain, Irishmen and women of all classes and denominations endured violence and intimidation.

Gemma Clark is lecturer in British and Irish history at the University of Exeter and author of Everyday Violence in the Irish Civil War (Cambridge University Press, 2017, paperback)